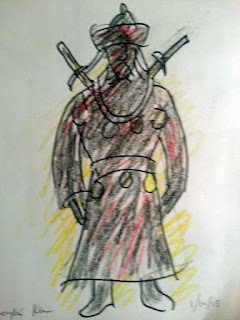 I am teaching at the Esalen Institute in California, and I have been given a bedroom overlooking the Pacific Ocean. As I lie in bed, I enjoy the sound of the breakers on the rocks below. I slip into a dream in which I am arriving at Ulan Bator in Mongolia. I have been invited to speak at a conference on shamanism, and members of a welcoming committee are thereto greet me with warm smiles.

I rouse from the dream, delighting again in the sound of the waves. I briefly reflect that my dream could be a glimpse of a possible future, since I have received invitations to shamanic conferences in Mongolia in the past. My breathing follows the rhythms of the waves. I am back in the sea of dreams. I am in Mongolia again, but out in a wild landscape in an earlier era, the 1930s. I am involved in a grand Indiana Jones-style adventure involving a magical object the Nazis are seeking.

I stir from this dream, and again hear the waves. Was I watching a movie just then? No. I am pulled back into 1930s Mongolia by a force that seems as strong as a Pacific undertow. I am there, in a bitter winter, where mounted soldiers are drinking blood from their horse’s necks to survive. I am in a different body, and have dual consciousness within it, as Robert and as the man who is trying to stop the Nazi tomb robbers. I know now what they are seeking. It is the spirit lance of Genghis Khan. People believe that this object has immense power, like a shamanic weapon of mass destruction.

While I am fully engaged in this drama ,I am also aware of what is going on at the airport in a possible future. And I can hear, distinctly, the ocean sounds on a warm evening in California. The seesaw effect has changed. I am now aware of all three situations simultaneously, and have an overview of all of them. My focus on one situation will blur a little as I give full attention to one of the scenes, but my perception is never altogether lost.

I spent the whole night like this, with pauses to record details.

Clearly the night had given me research assignments. I had never heard of the spirit lance of Genghis Khan. I found Jack Weatherford’s biography of Genghis Khan, and there it was, on page one. I read that Genghis Khan is a godlike figure for some shamanic lineages in Mongolia and that his power was held to have been preserved in his spirit lance, adorned with black horsehair. The burial place of this magical object was kept secret in a forbidden zone in Inner Mongolia. In the 1930s, there was a race to find it. It vanished, reportedly after being carried to Ulan Bator by armed monks – it vanished.

Oh yes. On my return home from California I received an invitation to a shamanic conference in Mongolia. I had too much going n in my calendar to accept, in ordinary realty. But since my dream self went, maybe a parallel Robert did also.

- This is my journal report of oneiric adventures before the pandemic. My drawing is from a visitation by a Mongolian warrior shaman on another night, in that drifty space between sleep and awake. I have often dreamed of Central Asia.

What was going on that night at Esalen could be termed "seesaw" dreaming. You are pulled back and forth between different dream situations. You may be participant or observer, or both, in each of these scenarios. You may have the impression that the action is playing simultaneously, in two or more locations. I am interested in all forms of multiple dreaming, in which we may mange to be present in consciousness in two or more places at the same time.