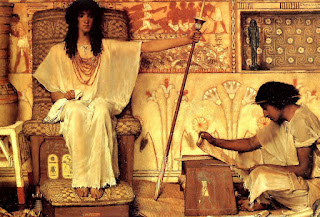 Jewish midrash, Hellenistic romance, and the coded manual of a Mystery school?

The divine double, or heavenly twin, one of my favorite themes in the history of religion. In a recent study, The Greatest Mirror: Heavenly Counterparts in the Jewish Pseudepigrapha (Albany, NY: SUNY Press, 2018) Andrei A. Orlov tracks it through the Pseudepigrapha ("False Writings") the name given to a mostly Jewish body of texts from late antiquity whose authorship and provenance is disguised or concealed.

Most interesting is the story of Aseneth, the high-born daughter of the chief priest of Heliopolis who is married to Joseph, the dreamer and patriarch. Her tale grows and grows from a few lines in Genesis through midrash and imagination until it becomes a popular Greek romance novel - and maybe also a coded manual for a Mystery school. In the two Greek-language versions of her story Aseneth receives a visitation from an angelic being who looks exactly like Joseph except that he flashes with fire and lightning. He feeds her mysterious honeycomb from his mouth and she is infused with divine essence and wisdom. When she looks in the mirror of water and sees the face of another radiant being, apparently her own divine double, who is named as Metanoia.

In its shorter and longer versions, Aseneth (as the scholar Ross Kraemer suggests we call it) is distinguished by the prominence it gives to the life and spiritual transformation of a woman, and to the appearance (very rare in Jewish texts) of a female angel who also happens to be her divine double.

In the Book of Genesis, Aseneth is the daughter of a powerful Egyptian priest. Pharaoh gives her to Joseph as a wife and she bears him two sons, Manasseh and Ephraim.

In Greek texts written somewhere between 100 and 350 ce, with versions in several other languages – the story was clearly popular – her tale expands into an ancient romance novel.

Though amazingly beautiful herself, she is awed by Joseph’s glorious appearance when he arrives at her father’s house (the priest is called Petiphres in Greek) in a gold chariot drawn by four white horses. Her father calls her down and wants her to marry him. She holds back and Joseph says he can’t marry someone wedded to idols. Aseneth is infatuated, she throws her magical statues and power objects out the window of her tower (yes, she has a tower) and dresses herself in sackcloth and ashes.

The visitor then instructs her to bring a honeycomb she did not know was in her storehouse. When she finds it, he eats some and she asks him to feed her from his mouth. A transfer of spiritual power takes place when Aseneth receives the honeycomb from the mouth of that heavenly being - who of course has a heavenly voice and is identified as the Angel of the Name. Then beautiful golden and purple bees fly upwards, impossibly, from the honeycomb. Next the bees fall dead but immediately rise again.

When her father sees her, he says “your face is fallen”. Dismayed, she looks in a mirror of water. She sees that her beauty is greater than before, Her lips are “roses of life”, Her breasts are “mountains of God.” When she turns from the mirror, her father sees the change too and falls at her feet in reverence.

Later we get required elements in a bodice ripper. Attempted rape by Pharaoh’s son, abetted by two of Joseph’s bad brothers, foiled by Joseph’s good brothers (breaking with gene, Joseph isn’t in the scene).

Sir Lawrence Alma-Tadema's painting of "Joseph, Overseer of Pharaoh’s Granaries" shows an Egyptian lady of power who may be Aseneth.