The gods are recognizable 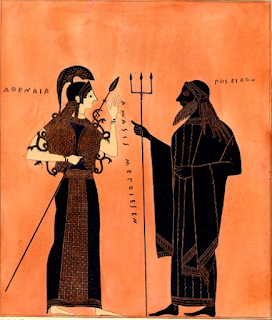 It's a recurring theme in world religions and mythology: it's perilous for humans to meet gods face-to-face, yet the gods may show up in manageable forms, including disguises that don't quite hide what is behind them. In his study of Greek mythology Mortals and Immortals Jean-Pierre Vernant puts it like this: “As well-camouflaged as a god may be in the skin of a mortal, there is something ‘off’, something in the otherness of the divine presence that remains strange and disconcerting even when the god is in disguise."

Thus, when Poseidon disguised himself as a man (Kalchas the diviner) to give support to the two Ajaxes, the son of Oileus recognized that he was dealing with a god by the “trace” Poseidon left as he moved away. In the Iliad, the mortal exclaims, “No, that is not Kalchas the seer. Without difficulty, I recognized from behind the trace of his feet and legs, while he was going away. The gods are recognizable.” Poseidon’s step was like that of “a quick winged falcon pursuing a bird across the plain”

The body of a god concealed as a human can reveal itself to be both the heaviest and lightest of vehicles. When Athena gets into her chariot, it groans and buckles under her weight. Yet when she leaps from place to place her feet do not even touch the ground and she glides over water with the lightness and speed of a sea bird.

One reason the gods veil themselves – in the semblance of mortal bodies, or in a concealing mist – is that it is dangerous and often fatal for humans to see gods as they really are. This is the inner meaning of the tales of heroes who suffered because they saw a goddess naked, as Actaeon paid with his life for seeing Artemis bathing nude. The seer Tiresias lost the use of his eyes as the penalty for seeing Athena as she is.

In the Hometric Hymn to Demeter, we read that Metaneira was terrified when Demeter shed the disguise of an old woman and revealed herself in splendor, The immortal body of the goddess gave out a light that spread far; her shining hair streamed over her shoulders and the stronghold was illuminated as if by a bolt of lightning.

Herakles wanted to see Zeus, but found he was unable to look at the god’s face until Zeus covered it  with an animal skin.

Vernant comments: “The paradox of the divine body consists in the fact that in order to appear to mortals, it must cease to be itself; it must clothe itself in a mist, disguise itself as a mortal, take the form of a bird, a star, a rainbow. Or if the god chooses to be seen in all its majesty, only the tiniest bit of the splendor of the god’s size, stature, beauty and radiance can be allowed to filter through, and even this is already enough to strike the spectator with thambos, stupefaction, to plunge him into a state of reverential fear. But to show themselves openly, as they truly are – enarges – is a terrible favor the gods accord to no one."

In the Odyssey, Alkinous claims that the Phaeacians saw the gods in their true forms – enargeis – hundreds of times in the past. The suggestion is that this was possible because the Phaeacians, in contrast to ordinary people, belonged to the family of the gods, who therefore do not need to guide their faces from them. No wonder that in the Mystery traditions, group journeying to the Phaeacian shore - the liminal territory where Odysseus washes up after his dramas with sea monsters and seductive goddesses - was a destination for group journeying. Worth remembering, also, that when Athena speaks to Nausicaa to prepare her for the stranger who she will find naked on the beach, the goddess does not appear in her true form but in the guide of a girl friend of the princess.

When Poseidon goes to feast with the Ethiopians in “the land of the rising and setting sun” he is described in the Odyssey as traveling, in a single motion, to both opposite extremities of the earth. he description of his movement suggests the nature of the gods as multidimensional beings. They project the semblance of physical form, and may use forms invented by humans, but their bodies are not subject to space and time and they are in no way bound by the rules of physical reality.

So much to learn!

Thanks for the endless explanations of words, ideas, places, cultures, methods, and mythologies.