Tracking the Dream Traveler to the King of Bulgaria 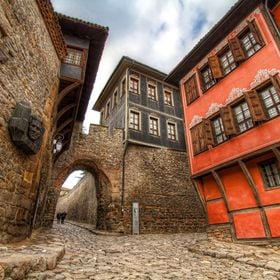 I have developed the habit of consulting my journals to see what happened on a certain day over years and decades, I have plucked the following report from my journal for May 20, 2021.

I am forever trying to keep up with the dream excursions of my traveling self. I think he hides some of his adventures from me, or leaves me just a postcard or a ticket stub. Over the past 24 hours, he enjoyed a romantic encounter at a chateau in France in the 18th century, had access to the private papers of an English duke of that era, and joined a soul friend in a deep experience of a parallel life.

He also made a visit to a college town in the Deep South that puzzles me. The kids here don't seem to read much. When he refers to an incident as "Kafkaesque", they have no idea what he means. He tells them, "Kafka made up some weird shit." They laugh but still don't get it.

In the early hours I raced through dream after dream, in one or more dream personas, as if hurrying through the cars on a high-speed train, sometimes going to an upper deck or down again. I jotted down many details but the last scenes are the ones that have energy for me. Becoming lucid in this episode, I am both observer and actor. I shall continue the narration in the first person, as the dream traveler.

I am in a long line of dignitaries waiting to be presented to the king of Bulgaria. Before we get to the head of the line I drift outside. I now have an aerial view of an intersection in the older part of a city, as if suspended in midair or looking down from the tallest tower.

I know, in my shivers, that this is one of those "thin" places where travel between worlds is easy if you have the right code. Coordinated movement here is vital. The crossing can only be accomplished if two players move in exact synchrony, as in an antique wooden puzzle box where you must push and pull pieces at the same time. I sense the presence of the second player.

Reality: I haven't been to Bulgaria in ordinary life though I have had Bulgarian students in my workshops. The Bulgarian monarchy was abolished in 1946; the child king Simeon II survived to become prime minister in the early 2000s. Photos of older parts of Sofia look like my dream, though I was looking from above. 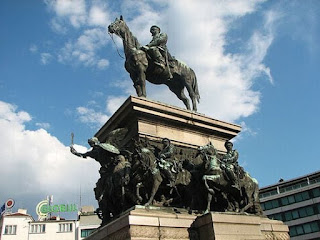 Initial action: Research! My dreams often invite me to attend new classes in history and geography and I enjoy taking them. Yesterday I had to research the career of the 18th century English general who became the Duke of Northumberland. This morning the assignment included the history of Bulgarian royalty. The statue is of the "Tsar Liberator", Alexander III, who freed Bulgaria from Ottoman rule in the war of 1877-8. Below him Victoria/Nike is leading Bulgarian and Russian soldiers into battle.