Dream Archaeology: Power of the Dog and Third Eye Wine


Two small examples of one mode of dream archaeology: following clues from a dream to an ancient culture and turning up evidence or documentation for something that was previously unknown or  incompletely known. First, an incident from this morning that may also be an example of dream precognition:

May 8, 2022
Dream and Follow-Up
Power of the Dog in Dream Archaeology
I'm excited by essays and materials I find in what at first seems to be a big white-bound bound volume. They include maps and charts and line drawings on an archaeology theme: The Dog. I reflect on related sources I have available to go further on this theme in my own research and writing, including Barry Lopez's fine work "Of Wolves and Men".
Later I am out in the woods with a man who knows them well. He leads the way off the main path to the right. He says the wolves are out, moving clockwise. It seems to be his plan to meet them face to face. I notice he hasn't brought his rifle. I'm willing to trust that he knows what he's doing and that if we meet the wolves face to face it will be a sociable encounter.
WHERE DOG=GOD AND SOUL GUIDE 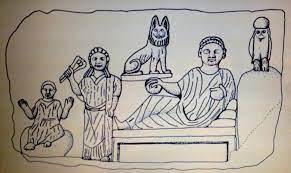 After recording these and several other scenes, I opened my email and found my daily pdf from an academic website, a paper on canine burials at Saqqara during the Graeco-Roman period by a team from Macquarie University in a collection published by the Czech Institute of Egyptology. [*] It describes the mass burial and mummification of dogs in ancient Egypt, 1,350 at this site alone, tens of thousands at Abydos.
The authors suggest that the primary reason for canine burial here was to provide an organic embodiment of Anubis in his role as psychopomp, guiding souls between this world and the afterlife. The dog buried beside or near humans becomes "an amuletic animal mummy... considered to be either an adequate replacement for, or a valuable complement to the Anubis amulet to ensure the continuing and unbroken assistance of Anubis for the deceased."
The article contains maps and charts and line drawings including the one shown here, of a 2nd century funerary stele from Terenouthis (Kom Abu Bellou), where the deceased is seen in the company of a dog and a falcon, aspects of Anubis and Horus.
So my dream of the archaeology of the dog seems to be a minor example of precognition or clairvoyance. The incoming email enabled me to fulfill part of my dream research assignment right away. I would probably not have made time to read that scholarly article without the dream; I have just a few other reading assignments. We'll see where the wolves are circling later on.

Here is a raw journal report from twenty years ago:

I am with a group traveling through ancient sites. We explore an Egyptian temple. Our female guide hurries the group past a chamber that intrigues me; it contains lovely blue-glazed pottery and a beautiful statue of a winged ba-soul. I tell the group, “This room is a chapel of the Ba.” The guide receives this with respect and acknowledgment. She tells us we will come out into one of the most beautiful vistas on earth.
I expect to come out onto the Giza plateau. Instead, the scene above ground looks a lot like the Vatican City, outside St Peter’s. I swivel my head to the left, to look back at the huge temple we have just left. In the crowded street, there is some confusion as drivers and other tour guides push their vehicles through the throng.
I leave the group to stroll among vendors’ stalls and coffee shops. Three men in the market invite me to join them in a glass of wine. They may be Egyptian. They teach me to say “chess” in their language.
I enter a dream within the dream. I learn that Egypt’s initiates used a “third eye wine” called Sem or Sekhem-Re. The wine was infused with blue water lilies. This helped to open the strong eye of vision, and to keep it open.
I am now able to look through an esoteric text titled “Initiates’ Vocabulary”. It explains key terms for soulcraft in ancient Egypt. There are terms here that are so far unknown to modern scholars.
There is an obelisk in one of the scenes, perhaps in Rome.

Once again, dreams set us research assignments. Excited by the dream, I searched online and hit the books and discovered that in ancient Egypt, Sekhem-Ra was the name of a fine vintage wine. It took me many years until, researching a new course involving dreaming in ancient Egypt, I came upon reports from field archaeologists that confirmed what I learned in my dream, adding fascinating details of how the Egyptians classified wines and dedicated them to the fortunate dead - and may have infused some wines with blue water lilies.  The stele of Ipuy, a craftsman of Deir el-Medina near Luxor describes how he meets Hathor in a dream. This is apparently the first time a non-royal in ancient Egypt left a record of a dream encounter with a deity. The stele includes the picture of a wine jar capped by blue water lilies and a bunch of lettuce. 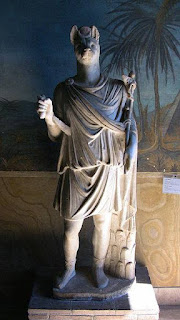 On the Egypt-Rome theme: I continue to research the fascinating syncretism between Egyptian and Graeco-Roman religion and practice, from the cult of Isis as described by Apuleius to the creation of hybrid deities like Serapis and Hermanubis.
[*] Mary Hartley, Alanah Buck, Susanne Binder, "Canine Interments in the Teti Cemetery North at Saqqara during the Graeco-Roman period" in Miroslav Bárta, Filip Coppens and Jaromír Krejãí (eds) Abusir and Saqqara in the year 2010/1 (Prague: Czech Institute of Egyptology, Charles University, 2011) 17-29.
Posted by Robert Moss at 10:04 AM