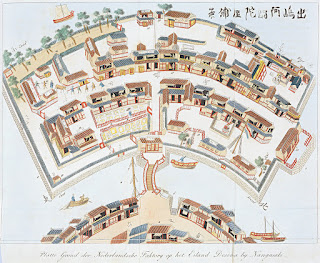 In order to find ourselves, we may first have to get lost. As I wrote in The Three “Only Things, “This is the cardinal navigational law of serendipity: You can only get to the magic kingdom by getting lost. You get there when you think you are going somewhere else and fall off the maps.”

David Mitchell relates that around Christmas in 1994, in Nagasaki, he got off at a wrong tram stop and stumbled upon “a greenish moat and cluster of warehouses from an earlier century.” This was his first encounter with Dejima, a trading factory of the Dutch East India Company built on a man-made island in Nagasaki harbor. For two and a half centuries, when Japan was closed to the outside world, this was the sole point of contact between Japan and the west.

Twelve years after alighting at the wrong tram stop, David Mitchell published his extraordinary historical novel The Thousand Autumns of Jacob de Zoet, which richly deserves its tremendous critical and commercial success. Mitchell succeeds in transporting us into the mental and physical worlds of two cultures at the close of the eighteenth century. He is a master of what he amusingly calls “Bygonese”, conveying how people thought and talked in an earlier time in a way that never seems labored or antiquarian. Among his memorable characters, Dejima itself becomes indelible. And he found it by getting lost.

Image: An imagined aerial view of Dejima from a 1780 woodblock print by Toshimaya Bunjiemon, published in Isaac Titsingh's Bijzonderheden over Japan (1825).