Tales of the Double: his doppelganger is being walked by his dog 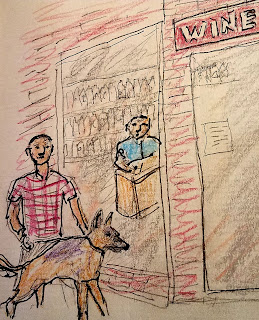 I want to report another of my encounters with someone else's doppelganger. It has a feature I have not seen mentioned in the literature that makes it deeply mysterious and potentially revelatory about travel in a subte body and what may guide and protect us in such outings.
My story unfolds in a small city in the Northeast. I was in the habit of walking from my home to the local branch of my bank in the era when that branch was still open. Along the way I passed a wine shop with a friendly owner. I would often stop in to say hello even when I was not in need of supplies. That morning, I came to the wine shop half an hour before opening time.
I was pleased and surprised to see the owner coming up the next street with his dog. I had never met his dog and was not even aware that he had one. I saw a fine German shepherd that was clearly in the lead. He was holding the leash but it seemed his dog was walking him. He was wearing a mauve plaid shirt, louder than his usual style. He looked vaguely in my direction but did not appear to recognize me so I continued my walk to the bank.
On my walk back, the wine shop was just opening. The owner greeted me at the door.
“Where’s your dog?” I asked.
He was puzzled. “Sally? She’s at home. I never bring her to the shop.”
“I saw you walking her a few minutes ago, just round the corner. Actually it looked like she was walking you.”
His expression suggested he was finding me even stranger than usual. “Describe my dog.”
“German shepherd. Beautiful. Great energy, really leading the way.”
“That’s Sally. But you’ve never met her. I mean, you didn’t even know I had a dog.”
“Not until half an hour ago. By the way, I see you changed your shirt.”
He was now wearing a quiet monochrome polo. When I described the loud mauve shirt he said, “I’ve got that shirt. It’s at home too.”
By this stage, I was starting to feel some concern for my friend. There’s an old superstition that if you see someone’s double as large as life, that could indicate coming death. Had I seen my friend’s fetch? I had the feeling it might be risky to have that much energy traveling outside the body while the owner was oblivious to his condition. I wondered if he had been thinking or feeling something so strongly that it might have set part of him off on a journey in a certain direction.
I was cautious in opening this area of discussion. However he was soon in tears, talking about the recent death of someone close to him. He had not gone to the funeral but now felt the need to make amends for old troubles. “I’ve been thinking about going to the cemetery.”
“I might think that my dog was leading me that way,” I suggested. Dogs are psychopomps – soul guides – in many traditions. Maybe that German shepherd was what the Norwegians call the  vardøgr, the advance guard of the soul that goes to places ahead of you, on this occasion.

Wonderful inspiration.
I Always find so many beautiful perspectives I resonate and appreciate within your chosen words.
Thank you for sharing your wise trancendental experience.

Recently lost our doggie Angel and have been dreaming of him. Thank you for this post.