Tales of the Double: Through the Net 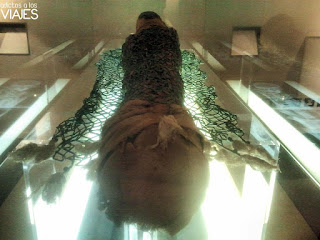 Quite often, in the liminal state of hypnagogia I find myself looking at the patterns and textures of what appears to be woven cloth or webbing. Sometimes I find myself suspended in the mesh. The following experience was quite tactile:

I floated weightless, looking into a dark, grainy field, textured like hessian, a very palpable depth. I felt I was hanging in this, as in a hammock or net. I was uneasy, to begin with, hanging between worlds. I did not feel stuck in the net. I realized I could push through the net and travel in any direction. I eventually resolved simply to open myself to my creative source.
The “hessian sacking” opened into a textile bazaar. I examined bolt after bold of richly textured patterns and designs.
I heard noise in my house and realized I was operating with multiple consciousness, fully engaged in dream travel while safely tethered to my body in the bed.
I spent the whole night slipping back and forth between dream locales, mediation, and long study sessions in which I devoured books and memorized material.
One of the dream episodes involved the Egyptian Mysteries, especially the mysterious god Ptah, whose power is associated with the breath and who is said to be the Giver of the Ka.
Another dream episode carried me into the realm of the Kabbalists. I tried out a thronelike chair with a hard wooden strut that stuck out low down at the back of the seat. This guaranteed that you would not get too comfortable or doze off. It was intended to assist Kabbalistic meditation.

These adventures sent me off into a spate of happy research. The palpable resistance of the web or net in which I had hung, and the fact that, once through it, I had access to Mystery teachings in corresponding locales, sparked many thoughts and speculations.
The name of the temple of Thoth at Khemennu (the City of Eight) in ancient Egypt was Het Abdit, literally the House of the Net. This net confined unevolved humans to their lower natures. But to initiates, it became a kind of cosmic trampoline, a springboard to higher realms. In Thrice-Greatest Hermes, G.R.S. Mead suggests that “this Net was the symbol of a certain condition of the inner nature which shut in the man into the limitations of the conventional life of the world, and shut him off from the memory of his true self”.
Mythologically, the net may also be the web of life or the Veil of the Goddess. The Egyptian goddess Neith wears a weaver’s shuttle on her head. The inscription at her temple at Saïs reads, “I am all that has been and shall be and no mortal has ever revealed my robe.” To go beyond the veil is to go beyond the ordinary human condition. It is possible that Neith, with her veil and her weaver’s shuttle, personifies the human energy web, spun from fine threads or lines of force or light;
The net I encountered may evoke the web of the human energy field, woven from Faraday’s “lines of force.” Those familiar with neuroscience may think about the reticular (literally "net-like") formation that regulates states of awareness and attention.
The net I pass through in lucid dreaming gives me the sense of being inside the cell walls of the larger reality, of testing the energy membranes that separate levels or dimensions of the multiverse. This may involve traveling from higher to lower astral planes, or - in deeper journeys - beyond the astral altogether. 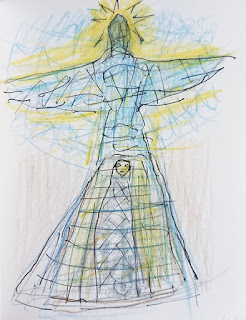 Looking at late Egyptian mummies in the small but excellent Egyptian Museum in Barcelona in the spring of 2029, I was fascinated by the net draped over one of the bodies. Though damaged by time and weather, the blue mesh was still shiny. I had the immediate impression that this net was a garment for soul travel, spread to encourage the deceased to ascend beyond the lower bodies to higher realms, perhaps the realm of the Akhet or Shining Ones.
The dry and conservative museum caption of course gave no hint of such possibilities. So I made a shamanic journey across time and dimensions to see whether my hunch was correct. I saw the spirit of the deceased rising to fill the blue net as you might put on a robe.I made a sketch of my vision in my journal. When I shared it with a friendly and imaginative Egyptologist she said,"You nailed it", adding that when originally placed,  the blue net was probably covered with stars, indicating the desired destination of the spirit who put it on.
Photo and journal drawing by Robert Moss

The ancient Maya wore ceremonial net skirts that represented the Moon Goddess, who was also associated with the earth and maize.
https://www.clevelandart.org/art/1967.29#