In the Beginning was the Scream of the Hawk 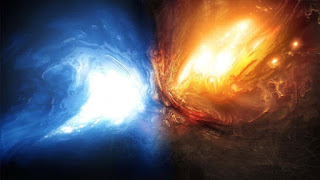 In the Norse creation stories, there are elements we recognize from other mythologies. The world is born from primal chaos. We are inside the body of a cosmic being, macrocosm to our microcosms. The being may have been torn apart in a primordial sacrifice, the origin of human sacrifice to the gods. The Norse version, unsurprisingly given the bloody reputation of the Vikings, at first seems more brutal than the rest.
We read in the Gylfaginning in Snorri’s Edda that the giant Ymir is born out of a yawning void through the contention of fire and ice. Suckled by a primordial cow, Auðhumla, he is eventually slain and dismembered by the gods that are the progeny of a male being the great cow raised with her tongue from a salt-lick. Ymir's blood and sweat become the ocean, his skull the vault of the sky, his hair the trees and so on. Our sources on this are limited, contradictory and mysterious  The least colored by Christianity is in the Vǫluspá in the Poetic Edda, where an undead sorceress tells Odin – the god forever in quest of knowledge – how the world began and how it will end.

Word sleuthing may take us into deeper levels of the myth in the Nordic mind-sea. Norse scholar Henning Kure states that “ masculine name formation Ymir is mentioned in one of the þulur, the name lists, of Snorri’s Edda as a heiti, a synonymous name, for ‘hawk’. As such we are in no doubt that the name is derived from ymja ‘to scream’ and may refer to the bird’s shriek. The very closeness to the similarly derived noun ymr ‘scream, noise’ makes it hard to miss the association and must have been evident to any Old Norse audience.” * In contexts ymr could be the scream of a birthing mother, the groan of a tree or the clang of weapons. When the first being stitrs from primal chaos it is as the Scream of the Hawk.

Ymir emerges from Ginnungagap, variously described as a yawning gap or as chaos or the void. The prefix ginn- denotes something more than we can grasp, indescribably deep, potent yet formless, prima materia that the Creator – or creators – will shape and fix into definite forms. How do they accomplish this? According to the Vǫluspá, they yppa the world. Come again? The verb yppa can mean to lift, raise, bring up, come into being, announce, reveal. Henning Kure uses etymology as his miner’s lamp to plumb the secrets of creation in the Eddas:

When the sons of Burr [Odin and his brothers] did yppa the world, they made it come into being from the parts of Ymir. Yppa may mean 'announce' and this, I am convinced, is what the gods did. They announced Ymir's flesh to be earth, his bones to be mountains, his sweat to be sea, etc. They created the world by naming it, by putting it into words, and thus defining it in a comprehensible way. The gods announced the world by transforming Ymir – the scream – into words. The scream is the raw material of words. Words are shaping the world.

In the beginning was the scream – the inarticulate and 'much too awesome'. The world was yet to be formulated and contained on a human scale. The process of creation is dependent on the nature of the raw material. In the case of the scream, it must be turned into words and language. Everything exists by being named, designated by a word. *

The gods turn primal Scream into words of power.

Australian Aborigines say that the Ancestors walked this world naming things, and that as they were named, life forms appeared– the crocodile and the river, the gum tree and the goanna. When Odin and his brothers declared that some part of Ymir’s anatomy would become mountains or ocean, that his eyebrows would become a shield wall between giants and humans, metaphor became manifestation. In the beginning was the word, in the Eddas as in Genesis.

*Henning Kure, “In the beginning was the Scream Conceptual thought in the Old Norse myth of creation” in Rudolf Simek & Judith Meurer (eds.): Scandinavia and Christian Europe in the Middle Ages. Papers of The 12th International Saga Conference, Bonn: University of Bonn, 2003) pp. 311-319