Braids of the Goddess 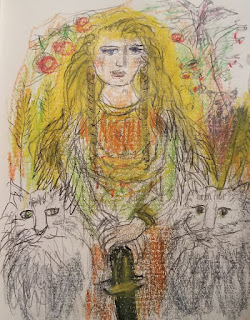 Lying in bed I am open to the appearance of the first spontaneous image. It comes at once: a long braid of a woman's tawny gold hair. Then another, and a rippling golden mane, and the flash of a jeweled necklace. Her nimbus is tremendous. Can this be? I now see a Norwegian forest cat, splendid as one who shared my home, but grown to giant size. And now the second cat. I see I am again being drawn into Nordic realms.

I suspect this quick sketch will lead to more as more is unveiled. The Lady of the Vanir I have drawn is not only the goddess of beauty and sensual love and the fruiting earth. She has her hands on the head of a staff, not the hilt of a sword. The staff or wand (which could be of wildly differing sizes) was the principal power tool of the völva, the Nordic seeress, and Freyja is the patron of her arts. The Heimskringla describes her as the high priestess who was "the first to teach seiðr, common among the Vanir, to the Aesir".

I add a falcon, her bird and occasional ride, and a hint of her feathered falcon robe. And a wild boar, another of her animals. I put put ripening barley and wheat, and apple and cherry trees, and lingonberries around her.

Waking, I disinter The Saga of Vanadís, Völva andValkyrja a wonderful thesis gifted to me by its author, Valgerður H. Bjarnadottir, an Icelandic scholar who melds dreaming with exact research. She came to a weeklong workshop on Reclaiming the Ancient Dreamways that I led in Gloucestershire long ago. Valgerður has made it her cause to revision the Old Norse myths from a Goddess perspective and opens her thesis with her own wild and beautiful dream of Freyja gentling giants. Dreams and visions set us research assignments.

Many names of the Goddess

I get out one of my editions of the Prose Edda, compiled by the Icelandic scholar Snorri Sturluson in the 13th century. "Freyja has many names," we read in the first part, called Gylfaginning. "She is called Shining Sea (Mardöll), and Flax (Hörn), and The Giver (Gefn) and Sow (Sýr).... She is also called Vanadis."

The second part ofthe Prose Edda is titled Skáldskaparmál , "The Language of Poetry". It is framed as a dialogue between Ægir, a deity of the sea, and  Bragi a god of poetry. A section is devoted to the correct ways to describe the deities of the Vanir. We come to this:

How should Freyja be referred to?

the daughter of Njörðr,
the sister of Freyr,
the wife of Óðr,
the mother of Hnoss,
the possessor of those fallen in battle,
of the hall Sessrúmnir,
of male cats
and of the necklace of the Brísings,
the god of the Vanir,
the household deity of the Vanir
and the god whose weeping is beautiful."

“Any goddess can be referred in kenning by associating her characteristics possessions, activities, or family members with the name of another goddess.”

If all the goddesses can be called by each other's names, it would seem they are all aspects of the Great Goddess. Among the Vanir her name beyond names is Vanadis.