How a Völva Got the News 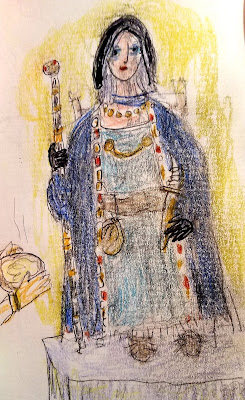 Her name is in the Saga of Erik the Red. Her name is Þorbjörg Lítilvölva, Thorbjörg Little Völva. She was one of a sisterhood of nine seeresses but now she is traveling alone. Gone are the days when a völva of her renown might travel with a chorus of thiry to sing for her shamanic flights. Thorkell, the big man in the settlement in Greenland, has begged for her presence.
When she arrives in her deep blue robe, studded with semiprecious stones, and her black lambskin hood and gloves lined with white cat's fur, holding her staff of power, with her bag of tricks hanging from her touchwood belt and her knife with the boar tusk handle, the lord of the manner treats her like royalty. He guides her to a seat set up on a high platform like a throne. She is fed foods of seiðr, porridge made with goat's milk and a bowl of animal hearts. Is she ready to give the frétta (the word means both news and prophecy)? Not before she has slept and dreamed.
The morning after, she asks for someone who knows Vardlokur, an ancient song for journeying. Guðríður, an Icelandic  woman of high degree, knows the song but is reluctant to sing it because she is now a Christian. Her resistance is overcome. A circle of women gather close around the völva. The song is achingly beautiful. It pleases the spirits of earth and sea and they join the seiðr. No longer alone, the völva takes wing and follows the skeins of her dream into the future.
When she returns she announces, ,"Now many things stand revealed to me that were hidden before". The news she brings back will carry the woman who sang for her all the way to Newfoundland; Guðríður will become the first white woman in history or legend to give birth in North America.
Dressed for the part
I was fascinated by the detailed description of Thorbjörg's costume in chapter 4 of the Saga of Erik the Red. She wears "a blue woven mantle adorned with stones down to the hem". She has a necklace of "glass beads"(that may be amber). She has "a black lambskin hood lined on the inside with with white cat's fur". (Hoods were generally separate from robes in this period of Scandinavian history.) There is more white cat fur inside her black lambskin gloves. She carries a staff with a brass knob decorated with stones. She wears "a belt made of touchwood", with a bag of her magical power tools attached. She has a knife with a tusk handle; it would be boar tusk in most of Freyja's domain, but up in Greenland it might be walrus. The end of the knife is broken off, a sign that it is for ritual use.
There are mysteries here, of course. The cat's fur is easily explained by the close affinity of Freyja, goddess and high priestess of the völvur, for cats, who pull her carriage through the sky. But: black sheep, white cat? And what of the touchwood belt? It has been suggested that "touchwood" is the English translation of an Old Norse word for a fungus that grows on birch, oak and beech trees. Cut off the outer rind, slice the inner part thin, soak and hammer and you can make a pliable felt-like material. Wearing this as a belt would confirm your connection with trees (from which Nordic peoples trace their descent in the myths). It also adds to your potential as a firestarter since a little piece, torn off, makes excellent kindling.
The saga doesn't tell us what Thorbjörg wears under her deep blue robe. I have given her a light blue woolen dress, a sign of the high status the saga accords her. She might, however, have been wearing a tunic of animal (probably reindeer) skin.
Dreaming and singing what is to come
I picture the völva deep in her vision of what is, what was and what will be. I turn back to Valgerður H. Bjarnadóttir's excellent study, The Saga of Vanadís, Völva and Valkyrja, and read:

"The völva (the one who turns, bends and evolves) is the one who sits at the hub(or völur) of the wheel, thus having a view into every direction. She could not only see into the wheel of time, she could turn it and bend, influence the future with her prophecies. She stored memory and from that memory she could predict a future, but in addition to that she was in touch with the collective memory of all times and places, Urðr, Verðandi  and Skuld. From that connection came her ability to predict the becoming future. "
Drawing by Robert Moss
Posted by Robert Moss at 6:00 AM

Wow, I love the rich description of the clothing, and the evidence of how valued this personage was in cultural settings. I've been interested in Scandinavian history and mythology and the sagas as well and found great value in this article not only for its information, but in the way it stimulated my imagination. Thank you!