Healing the Fragmented Self in the Arms of Great Mother Bear 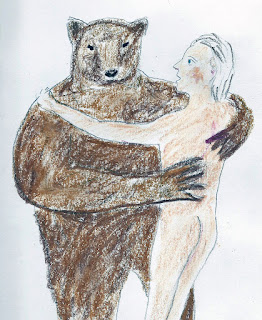 If we are to be whole, we must gather and bring together the divided aspects of our selves. Some parts of our soul may have been missing for a very long time - from the time of trauma in early childhood, or in the birth canal, or even inside the womb. Dreams will put us on the track of these lost boys and girls, as will a childhood memory. Caring friends, gifted therapists and genuine shamans can help us to bring them home.

With or without help, bringing the vital energy of our younger selves home to our present bodies can be a bumpy process. Say you have succeeded in making contact with a child self who checked out of your life many years ago because the world seemed so cold and so cruel. To persuade that younger self to come into your body and your world now, you will need to persuade her that you are safe and you are fun. To do that, you'll need to promise that she will never be shamed or abused again, and that you'll do things and eat things that please her. She may not believe your promises unless you can invoke some powerful helpers. Here the animal guardians can play an essential role, because a young child who doesn't trust you may trust the bear or the tiger that is supporting you.

If you succeed in reclaiming a younger part of yourself, the blessings may include fresh energy, imagination, skills - and joy. But to keep that part of your vital soul with you, you are going to have to make good on your promises over the long haul. There will always be the risk that if that part of you senses a recurrence of an old trauma, or simply finds you drab and boring to be around, she'll try to take off again.

In my personal work in facilitating soul recovery over many years, I have found Great Mother Bear an impeccable ally. She is renowned as a fierce protector of her young, especially against possible harm from the males of the species. On several occasions when a child self was reluctant to come home to an adult self - or was threatening to leave again - I have found that invoking Great Mother Bear can serve wonderfully to confirm or re-make the union.

In a gathering of active dreamers on a mountain in the New York Adirondacks, I introduced a group journey to work with Great Mother Bear in this cause.

We had begun, as we usually do, by finding ourselves standing with a special tree, rooted in the earth rising between earth and sky, drinking the light.

I invited our dreamers to go down through the roots of the tree, into the Cave of the Dreaming Bear.

"When you feel ready, turn around in the lap of Mother Bear so you are facing out. Extend your arms and invite a younger part of yourself - one that has been missing or tends to go absent from your life - into your own embrace.

"When you feel that younger self in your arms, let Mother Bear fold you both in her great embrace and bring you closer together, so close that you become one." 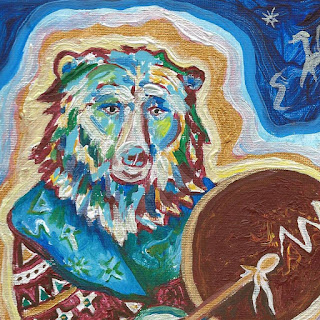 After giving these directions, I drummed for the group and each member pursued her own journey down through the tree roots, into the Place of the Bear.

At the end of the drumming, we shared our journey reports. Most of our dreamers reported experiences that were vividly real, comforting and energizing.

"I had the wonderful sense of being rocked in the arms of Mother Bear," one of our dream journeyesrs told us. "When I extended my arms, my four-year-old self came to me. We were then blessed by an amazing family reunion. My favorite grandmother, who died when I was four, came to join us, taking on the appearance of a child of the same age. Then my two daughters, also looking as they did when they were four, came to join the party. I feel like having a birthday party for all of them."

In the Cave of the Bear, another traveler told us, she had "a kind of Goldilocks experience." She met three young bears that shapeshifted into child aspects of herself. They joined her in the family hug, and then they all proceeded to set up a tea party.

One of our dreamers  had the experience of rebirth, of being born through the generous body of Mother Bear.

Another woman in our group had tried, in the past, to reach out to her own four-year-old self who had gone missing because of abuse. In one encounter, that very young self had told her. "I can't be with you all the time because you get too distracted." Then the child self added, fiercely, "All your good ideas are from me and you have to make them happen." At the start of the drumming, the four-year-old reappeared and told her, "I'll spend the weekend with you because this stuff is really cool." She did not consent to enter the dreamer's embrace, within the arms of Mother Bear. Instead, what came was a "golden child" who seemed to be more than a younger self, carrying great gifts of creativity, innocence, and light energy.

Yet another dreamer met a younger self who was urgent for her to go beyond the Cave of the Bear, back to the childhood home where bad things had happened. She complied, and found herself intervening, as her adult self, to close and lock the bathroom door, so her child self would have safety and privacy. She felt deep closure and resolution, and commented, "If you can strengthen the adult, you can save the child." 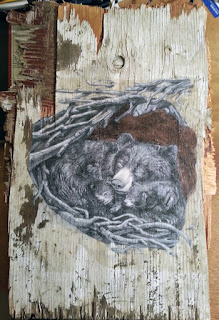