The song that is a road and the songs that come from the plant spirits. 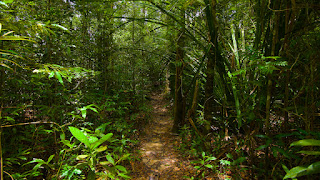 You find the villages of the Temiar when a shady path through the rainforest opens out onto a field of hill rice or a clump of man-high tapioca plants. This people of the Malaysian rainforest live in the old way, by slash-and-burn agriculture, moving their thatched houses when their fields get tired. They live very close to their land. Their stilt houses are walled with bamboo poles, laid horizontally so there are gaps between them. There are also gaps between the bamboo slats of the floors. Earth and trees are always visible. No solid boundary is set between human settlement and the natural world.

It is not surprising that, in this setting, people have an intimacy with the Earth that colors and informs their dreams. They believe that everything is alive and conscious, and that in dreams human spirits, traveling outside the body, encounter spirits of plants and animals and mountains and rivers. There is great power in these encounters, especially when a tiger or a tree gifts the dreamer with a song that can later call in its energy for healing. A song of this kind, received in a dream and freighted with the power to summon an animal guardian, or wake a mountain, is called a norng, which literally means a “road”, or pathway. The kind of path that can get your body safely through the forest, or guide a soul to where it belongs.

I learned about the Temiar through the beautiful work of American musicologist and anthropologist Marina Roseman, who has not only recorded their dream songs but has sung in the women’s chorus when healers sing over a patient.  I have listened to her recording of a tiger dream song. It is thrilling. Above the tapping of bamboo sticks, you hear the gravelly voice of the tiger as he rises from a nap to become an ally in healing, by driving away a disease spirit, or lending his own fierce vitality to a sick person.

One of the songs Roseman translated reveals the process of acquiring a healing song from a plant spirit.  A man named Uda Pandak had been seeding and tending keralad plants, patting and shaping the earth around the roots. In the time when the keralad came into flower, he smelled its fragrance strongly inside a dream. After releasing its odor, the plant took human form and announced a spiritual connection with the dreamer.  “It is you that I want.” As a human, the plant now began to sing, giving the dreamer a new song for healing. Notice the stages in this process, which proceeds like the natural growth of fruit and flower. You make a connection in the natural world, by getting your hands in the earth, seeding and weeding. The plant releases its odor. Then its spirit morphs into human form, initiates conversation and finally produces the song.[1]

The ability to receive songs from spirit guides in dreams promotes a Temiar dreamer to the status of "a person with halaa", a powerful medium.  In the narrative of Uda Pandak, he did not ask for a song or a visitation by the plant spirit. However, he laid the ground by tending the earth around its roots. The keralad plant's "head soul" emerged of its own volition and met the "head soul"of the dreamer. Interestngly, Roseman found that Temiar, for the most part, do not request songs from the spirits. They believe that the spirits will come spontaneously when they are living close to the earth and respecting life upon it.

Text adapted from The Secret History of Dreaming by Robert Moss. Published by New World Library.
Posted by Robert Moss at 9:23 AM

Thank you for this. This serendipitously touches upon two new insights in my life: 1. That it is good and needed for me to bring plants into my home for I need their companionship. 2. I will facilitate my healing with singing.