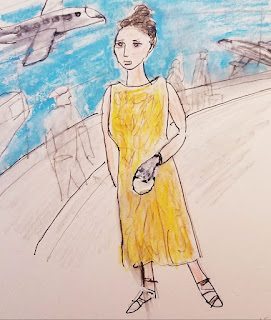 The Book of the Road (Putnik) was on a list of banned books in Tsarist Russia. It was a treatise that attributed high importance to chance encounters. It reflected traditional beliefs about whether it is lucky or unlucky to meet certain kinds of people on the road. To meet a nun, a priest or a blind man is unlucky. To meet someone on a bridge or threshold is ominous  Such views were deeply rooted in traditional Russian culture, even in the mind of Tsars. Ivan the Terrible thought it was a terrible omen if anyone crossed his path when he was setting out on a journey and had such offenders killed. [1]
I am more in sympathy with the Greek saying that the gods love to travel in disguise, so we should take care of strangers.
“Mind attracts mind.” Jung observed that this principle is at work in chance encounters where more than chance seems to be involved. Jung described what happened when a stranger sat down next to him on a train. The stranger was a general. “We talked, and although he did not know who I was, he told me all about his dreams, which is certainly unusual for a man of his position. The general considered that his dreams were absurd, but after listening to him, I told him that one of his dreams had changed his whole life, and that otherwise he would have been an intellectual.
“The general was startled and looked at me as though I were a witch, or at least a person gifted with second sight. But in reality, it was the unconscious which was knowing and directing. The general had sat down next to me because he was unconsciously searching for an answer.” [2]
Jung felt the general was called to sit next to him because something deeper than his conscious mind was calling for a mentor, to help him make his dreams conscious.
My friend Carol, a family counselor and addictions counselor or great wisdom and compassion, encountered an elderly man who was praying for an angel.
Carol went to a pharmacy to pick up a prescription. There were some problems with the paperwork and she was feeling quite grumpy. When she came out into the parking lot she noticed an elderly man pushing a shopping cart, unsteadily, towards his car. When he reached his car, he left the cart by the trunk, still filled with his purchases, and slumped into the driver’s seat, leaving his door open.
“I knew something was wrong,” Carol told me. “I sat in my car as three people walked past the old man. Then I knew I had to check on him.”
She walked over to the old man and said, “Do you need some help?”
“Well, yes. I did ask if you could use some help.”
“You’re not gonna believe this. Right before you showed up, I was sitting here praying to God to send me an angel. Could you put my shopping in the trunk for me?”
“ I would be happy to do that.”
The old man popped the trunk and Carol loaded his shopping bags. The contents felt soft Carol guessed the bags contained products like Depends, for older people whose bodies are failing. She noticed a walker, folded, and two canes in the trunk.
“I came out too soon,” the old man told her when she had finished loading. He did not explain exactly what this meant, but he told Carol that he was the caregiver for his wife. They were both ninety years old and they had been married for seventy years.
“Are you sure you can drive home safely?” Carol asked.
“I’ll be okay. I know there is an angel watching over me.”
Carol commented later, “If I was an everyday angel for him in that parking lot, he was a kind of angel for me. I felt happy and blessed by this encounter. All my grumpiness was gone.”
.    Chance encounters may not be caused, in the sense of being made by appointment, but they may be called.

Travel by train, as Jung found, or by airplane can provide almost ideal conditions for a chance encounter with a stranger that may lead to extraordinary things. People are on the move – which may help release them from routine inhibitions – and at the same time the circumstances are contained and relatively “safe”. Contact need last no longer than the ride or the wait at the station or departure gate.
On a train in the mountains of Sweden in 1904,a dispirited young Danish artist, Emilie Demant, found herself questioning her calling yet again. A stranger struck up conversation. He was a Sami wolf hunter and trapper named Johan Turi He told Emilie he had a dream of writing a book about the Sami, famous as a shamanic people of the drum. She moved to Sami country and helped him to produce the book and in the process matured into a brilliant artist and a pioneer Sami-speaking female ethnographer, the author of important books from her own fieldwork and fatherig of stories from the grandmothers. Pre-pandemic, chance encounters during my almost constant air travel were a great compensation for missed connections, long layovers, and aching knees. I found strangers willing to open up, drawn together to commiserate about delays or share travelers’ tales. Many clearly felt an active desire to tell and listen to stories, if only to shorten the seeming duration of a flight or a layover.
Generally, I did not initiate conversation unless I had a positive feeling about the person sitting next to me, or was intrigued by the title of the book they are reading. Often my neighbor on a plane would be the first to speak, especially when I was carrying one of my own books.
I will never forget the matriarch who took the seat next to me after settling her extended family in various parts of the airplane cabin. She noticed the beautiful cover of the second edition of my book Dreamgates and asked if she could look at it. Naturally, I handed it over. Opening the book at random, she found herself reading a section headed “Designing Your Home on the Other Side.”
She turned to me in high excitement. “Is that really possible?” she demanded.
I told her “Absolutely.”
I explained the group adventures I lead in which we have observed how the creative imagination constructs living environments – and cities, universities and pleasure domes – on the other side of physical death.
“I will buy this book as soon as possible!” the elegant matriarch declared. “I have spent twenty five years creating a jewel of a home in Carmel, California. I am going to be spending a lot longer in my next residence, and I want to get it right.” 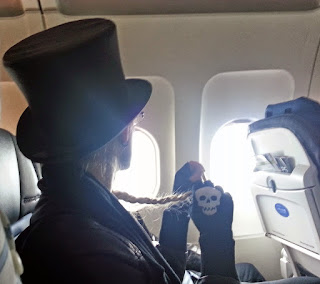 Journal drawing: "Airport Lady of the Veil" by Robert Moss