A Limbo of Unfulfilled Creative Spirits 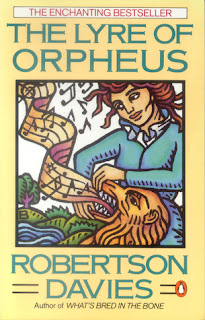 Notes from a Reading Life
"You are awakening the little man," the Gypsy queen announces to Simon Darcourt, the professor-priest. He fears she is referring to his neglected male organ but soon we learn that the little man is E.T.A. Hoffmann. The deceased composer and storyteller has been roused from his torpor in a Limbo of unfulfilled creative spirits by a plan to complete his unfinished opera "Arthur of Britain".
I am rereading Robertson Davies' novel The Lyre of Orpheus, the final book in The Cornish Trilogy. It makes me laugh and tremble and shiver with excitement, sometimes in the space of one paragraph.
In the previous novel in the trilogy, What's Bred in the Bone, Davies gave us a daimon reviewing the life dramas of a character he is supervising with the Angel of Biography, the Lesser Zadkiel. They are seated comfortably in the wings as the play goes on. Simon Darcourt, a continuining and simpatico charcater throughout the trilogy, can't eavesdrop on their conversation but intuits how they operate:
“Of course you know what Hesiod calls daimons: spirits of the Golden Age, who act as guardians to mortals. Not tedious manifestations of the moral conscience, like Guardian Angels, always pulling for Sunday-school rightness and goodness. No, manifestations of the artistic conscience, who supply you with extra energy when it is needed, and tip you off when things aren't going as they should. Not wedded to what Christians think of as what is right, but to what is your destiny. Your joker in the pack." 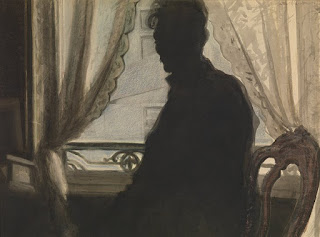 In The Lyre of Orpheus. Robertson scares us with a vision of what happenss to creative spirits that won't give their best work. Here's how the dead Hoffmann describes his current situation:
"I find myself now in Limbo, in that part of it reserved for those artists and musicians and writers who never fully realized themselves, who never quite came to the boil, so to speak. Limbo: not the worst of hereafter, for it is free of the chains of space and time, and permits its denizens a great deal of versatility and, shall I say it, some posthumous influence? Still, not to be too delicate about it, Limbo is a bore."
He confesses, "We never really did our best and that is a sin of a special kind".
Yet there is hope of release. When someone among the living - even the dullest academic plodder - takes an interest in the work of an unfulfilled creator, that stirs things up. The creative spirit in Limbo may now seek to join forces with the person who is reviving or enlarging his work. So Hoffmann now plans to "stand at the shoulder" of Schnack, the feral, dirty young musical prodigy who wants to complete his opera (and has the budget for it) "and push her in the right direction, so far as I can."
In a conversation about The Lyre of Orpheus for The Camelot Project,  Robertson Davies said, "I write novels that I hope will be interesting just as stories, but they also have implications and byways which I think would interest people who have more information. That may conceivably lead them to form conclusions about the persistence of myth in what we are pleased to call real life. I get awfully tired of people who talk about real life as though it had no relation to the life of the imagination and the life of legends and myth. They would do better to look again, though the trouble is they don't know enough in order to know where to look."
Hoffmann's Arthurian opera is fiction but the Arthurian triangle plays out in the novel. The idea that secret working minds can reach to each other across death is no fiction to me. Yeats spoke of it as the "mingling of minds". Imagine that.
Art:  Léon Spilliaert, The Silhouette of the Artist (1907),. Museum voor Schone Kunsten, Ghent.
Posted by Robert Moss at 9:37 AM

I keep coming across references lately to the return of the ancestors. Shall add this to the list.

Thanks, Robert, for your blog.