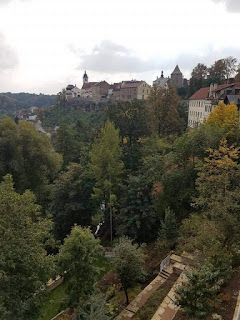 I try not to rush to organize my dream memories as a linear narrative. I love stories with a beginning, a middle and an end. However, I am also aware that in dreaming we may shift from one scene - or one world - to another. Dreams may be nested inside each other, or playing on many screens at the same time. Dreaming, we can act and observe simultaneously in multiple realities on multiple tracks.

My dreams from the last cycle of sleep overnight remind me of Borges' story “the Garden of Forking Paths”. Riffing on the detective genre, Borges anticipates the Many Worlds hypothesis in physics with his account of a legendary unfinished Chinese novel whose plotline is quite different from most narratives. In fiction, as in ordinary life, a character typically comes to a point of decision, makes a choice, and then the paths not taken fade away. In Borges’ fiction within a fiction, all possible outcomes of an event are manifested simultaneously, opening different event tracks. The proliferation of possibilities is enacted again and again along each track. The constantly-diverging paths may converge again, as the result of new circumstances.

In the Borges story, the stakes include life or death and vital wartime intelligence. My brief report from a dream excursion last night involves small decisions without scary consequences. I find it entertaining as a dream introduction to the forking paths of the Many Worlds.


I deliver a wildly popular lecture to a big crowd in a castle near Prague. In the forecourt afterwards, I notice there are hundreds of Czech coins on the ground. I bend down, pick up a 20 korun piece, and present it to a young woman. She is embarrassed, pointing out that the coins were left as an offering. I tell her she can  use the 20 crowns (about $1) to make an offering in support of something she wants to manifest in her own life.  There is a wonderful sense of abundance, service and simplicity.

After many hugs with people from the group, I am alone and need to find my way from the castle to a hotel near the city center.

I explore at least four options. Though they are laid out here as a sequence, I think I travel on all four tracks simultaneously in the spacious reality of dreaming.

1. I follow the crowd from my lecture. I see lots of people walking to the city center along railroad tracks. I walk parallel to them, across the tracks. Then

2. I am on a train. A laughing girl puts a hat on my head that isn’t mine as we come to a station. I retrieve my hat from an overhead rack. It is soft tweed like an Irish walking hat. Someone has removed the leather band. When I try it on, the hat is too small for me and the crown has changed shape. It now looks like the "topper" on a cartoon leprechaun. I forget the hat because now

3. I am walking down the hill from the castle to a pleasant shopping district. I meet an elegant lady in furs from Vienna. She is sampling several fine wines and may be a dealer. She tells me, "I am here for the wine". We discuss sharing a taxi. Before this happens

4. I manage to hail a cab in a different neighborhood Solo again, I wait for the driver to make room for my packages. The taxi morphs into an armored military vehicle bristling with weapons. The soldiers are friendly and soon we are speeding along the highway towards Prague.

Feelings:  Entertained. Glad to have some new material relevant to one of my favorite themes: living consciously in the multidimensional universe.

Reality check: I was scheduled to lead a retreat in northern Bohemia this week, before the pandemic forced me to put a hold on in-person workshops and international air travel. I have taught and traveled in the Czech Republic many times over the past decade. Transit issues involving the Czech Republic are not an exotic element in my dreams.

I have taught and traveled in Ireland, have some Irish ancestry and am not a stranger to leprechauns.

I like good wines but not as much as the lady from Vienna, known only to me in the dream.

I love trains, though I rarely ride them these days. I am alive to the symbolic resonance of a train (as in training) and a track (as in line to a certain destination) in dreams.

The switch to a military vehicle in #4 may reflect security concerns in relation to literal travel.

My dream travel agent, also no doubt my dream scriptwriter, gave me at least four ways of getting to my destination As I noted, I don't think options 1-4 are a linear sequence. They appear to be glimpses of events unfolding on four parallel tracks in alternate realities, between which the focus of my dominant personality shifts back and forth. I am arriving at the station, amid the funny business with the hat, at the same moment I am speeding along a highway towards Prague, in the armored car.

Maybe this isn’t so different from life anywhere – except that in ordinary reality we are often quite oblivious to the fact that we walk in many worlds.