The Way and the Changes 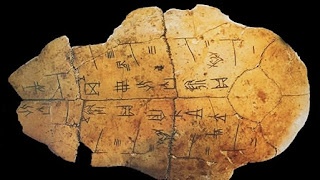 We find in China a word and a way of understanding synchronicity that are simple and profound. The word is Tao (also transliterated as Dao). It is sometimes translated as “way”, or the Way, which is good enough for me. If we are attuned to the Tao, then our ways are open.

The Tao of Psychology, Jean Shinoda Bolen’s lively little book from 1979 is one of the very best expositions of the theory of synchronicity. She goes looking for an easier and more elegant way to explain the phenomenon Jung struggled to define. She found it waiting where it has been for thousands of years, in the Chinese understanding of the Tao, the Way that had no name but generates the ten thousand names.

Inspired by this, when I led a course in I Ching, we drummed the binary code of the lines, changing and constant, yin and yang, on our single-headed frame drums, and pictured early diviners doing something similar.
We drummed the six lines of the twentieth hexagram, which is called Watching and whose shape is that of a watchtower, the kind that Chinese armies placed along the borders. We saw how rising up through the lines of the hexagram is like climbing steps from the lowest level of an observation tower to the very top, from a place of limited or impeded vision to a space from which we could see, without restriction, across time and space.
A great revelation came when we worked, with drumming and also with body movements, with the 61st hexagram, Wind on the Lake, called Zhong Fu, or Inner Truth. The hole in the center of the hexagram can be seen as the opening of the heart, and also as the unveiling of a window between worlds.
In Philip K. Dick’s fascinating novel of alternate realities, The Man in the High Castle, the casting of this hexagram brings a shift between parallel worlds. In the main narrative, we are in a world where the Axis powers were the victors in World War II, and North America is divided between Japanese and German occupation armies and other entities. Yet a subversive work of fantasy is circulating, a story in which the Allies won the war and everything is different. When Juliana casts Zhong Fu for Abendsen in the last pages of The Man in the High Castle, he understands (if only for a moment) that the alternate reality he thought was fiction is true, the real world. We see the observer effect working on a human, and even global scale. If only for a shimmering moment, as the coins roll and settle, we glimpse how it may be possible to switch worlds.
The way we see reality generates our experience of reality. A method of seeing like the I Ching can make us co-creators of our worlds. The Great Treatise suggests that through deep study of the Book of Changes we not only learn to meet every event in the right way but may be privileged “to aid the gods in governing the world.” [4] The Mawangdui text asserts that the Book of Changes “knows the reasons for light and dark” [5]. It “strengthens beings and fixes fate, taking pleasure in the way of all under heaven…This is why the sage uses it to penetrate the will of all under heaven.” [6]

Graphic: The precursor to I Ching as China's main system of divination (besides dream interpretation) was the Shang dynasty system for reading the "oracle bones": shoulder bones of animals and the plastrons from turtle shells.