Always coming home to the Goddess 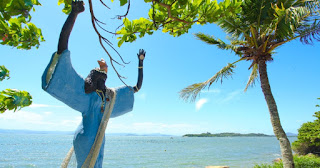 On my first night on Santa Catarina Island, I dreamed I was introducing people to the Great Mother Goddess, counseling them to treat her with respect.
On my last day on the island, I agreed with my host that we would take a drive around the bay side, to an area of Azorean fishing villages and oyster beds. The drive was wonderful. On the forested hills, indigenous garapuvu trees put up vivid yellow canopies, like floral umbrellas.
Just short of the village of Ribeirão da Ilha, I saw a wonderful female figure in a flowing blue gown, arms raised, a star in her hair.
"Stop the car," I said to my friend. "That's Yemanjá." I gave the great goddess of the sea and of motherhood her Brazilian name. In Spanish-speaking countries she is Yemaya. In both versions, her name is a contraction of the Yoruba phrase yeye omo eja, meaning, "mother whose children are like fish." The phrase evokes her endless fecundity; she embodies the sea of life, immense and universal and giving and forgiving.
In other parts of Brazil, her presence by the water would be no surprise. Hundreds of thousands of people gather by the sea in Rio de Janeiro and Salvador da Bahia for her festivals. But here in the south, I was in a very white part of Brazil, settled by Germans, Austrians and Italians after the Portuguese sent early colonists from the Azores; signs of the Afro-Brazilian tradition had been absent until now.
We noticed a sign across the street from Yemanjá, for the Ilé de Shangó, the temple of Shangó, the thunderer among the Orixás, the African gods who crossed the Atlantic with those brought to the New World in captivity. We crossed the road and were greeted by a friendly, maternal black woman who proved to be a filha de Shangó (a daughter of Shangó). She gave us an informal tour of the temple and explained that it had required a long campaign to get permission from conservative, white town fathers to place a statue of a black goddess at the edge of the bay. Pleased by my enthusiasm and my familiarity with some elements of her tradition, she invited me to take off my shoes and enter the sanctuary, where I was received with kisses and embraces as one of the family.
I studied photographs of the pai de ilé (the father of the temple) with drummers in Nigeria, and recalled how, thirty years ago, I nearly gave up my familiar life to go to West Africa to be trained and initiated in this tradition.
The priestess expanded her tour to the kitchen, where her daughter-in-law was nursing a baby, and showed us the pots used for cooking for the feasts that accompany their nights of ritual. I thanked her, and the Great Mother by the bay, with respect, for what felt like a happy homecoming.
I had been uneasy until now about my return flights to the United States, receiving broken reports of the progress of Hurricane Sandy. I now relaxed, feeling all would be well. All three of my flights went almost impossibly smoothly; I arrived a few minutes early at my home airport, on Halloween.
On my first night home, I dreamed again of a Great Mother, in a different guise, this time as a Native American spirit woman who opened and held a marvelous space for healing within the gathering I am leading on a mountain in the New York Adirondacks next weekend.
As I look over my wanderings in this world, and the traffic from the mythic world that is forever part of this story, I see I am always coming home to the Goddess. 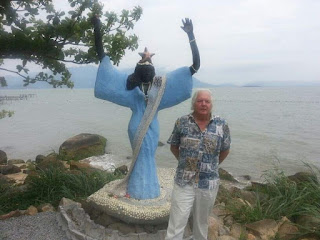 From my pre-pandemic travel journal. This episode unfolded when I was teaching in Brazil in 2011. Obviously it was not my first encounter with Yemanja.

Beautiful. The goddesses share their love with you everywhere, don't they?