Dreaming with the Bee Goddess in the Baltic 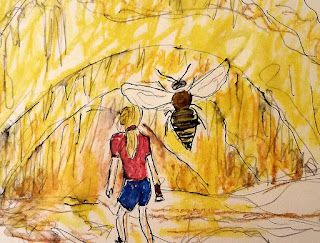 Warmed by the sun, amber quickens and streams,
remembering a golden world within wood.
A honey bee wakes in the dream of amber
and bursts from the yellow dome in its silver mount.

I track the bee to the old barn, paint-less and forgotten,
we had thought an abandoned wreck.
Something has been working here, unseen.
The barn is filled with sweetness. Honey drips from the rafters.
Soon I am drunk with abundance, giddy with joy.
The drone of the bees is a song, the chant of melissai.
I remember priestesses who bring the honey of the invisible
and always lead home to the bosom of the Great Mother.
With the song, a power is rising in the dark amber shadows.
I feel the heat of its quivering flanks.
Earth heaves with the stamping hooves;
its great windy mane drives a breeze through the still air.
It comes to me now, and I mount it with joy, safe in honey.
I rediscovered the text of this poem, composed in 2006. It revives my desire to learn more about the mysteries of the ancient Bee Goddess, the honeybee priestesses, and the connection between honey and amber. I look to the Baltic for the most reliable access to these things, because  the Bee Goddess (whose Lithuanian name is Austeja) is still known and revered there, and this is the source of the most precious amber, and because ancient and contemporary priestesses of this tradition have communicated with me directly when I have been in the Baltic lands.

Austeja is a woman and a bee in one person. Her name melds the Lthuanian word for weave (austi, as in weaving linen) and for flying swiftly, or repeatedly closing and opening doors (austyi)

When you make offering to Austeja, you toss your drink up into the air.Mead is best, offered to Austeja at ceremonies related to marriage, pregnancy and christening – she is the protector of brides and pregnant women. Her holiday [Zoline] is in mid-August, when bees are very active in bringing in honey. At this time, honey is offered to Austeja, a gift of the goddess to the goddess.

Before honey is gathered from the hives, the beekeepers pray and make offerings, Such a gathering is called biciuliai (“fellow beekeepers”). The use of the word has been  broadened to mean "close friends".

Bees are not ordinary. The death of a human and the death of a bee is described with the same word – there is a different term for death in all other species.A dead bee is to be buried in the earth. You are supposed to watch your manners around bees; they understand human speech.

In The Civilization of the Goddess, Marija Gimbutas,the great Lithuanian-born scholar of the religions of Old Europe, wrote that bees are symbols of the Goddess as the power of regeneration. They "may represent the Goddess herself, or souls that leave the body at death or during dreams.”