"Dreams are the facts from which we must proceed": a tribute to Jung 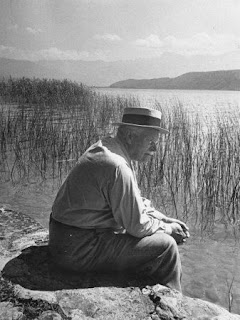 I have studied Jung's Red Book and read most of his recently-published Black Books, but Memories, Dreams, Reflections is the book I most treasure by this great depth psychologist and dream traveler and the one I constantly recommend to those who are just starting to explore his work. Here is a modest tribute.

I discovered Jung in high school and devoured many volumes of his Collected Works when I was an undergraduate, though I probably failed to digest the most difficult passages. In the midst of the psychic storms of 1987-8, I turned to Jung again, to see how he made sense of his own "confrontation with the unconscious". My main source book was Memories, Dreams, Reflections, his life story as recorded and edited by Aniela Jaffé based on conversations he began when he was eighty-one.
His great life crisis began in 1912, after his break with Freud. For several years, he lived in a house of the spirits. The contents of his dreams and visions seemed to be spilling over into his physical life, producing poltergeist-like phenomena and apparitions that his children could see. Night after night, he descended into a dark and thrilling Underworld where he met mythic characters who seemed to him to be entirely real and transpersonal. He often felt he was under an avalanche of psychic events, "as if gigantic stones were tumbling down upon me." His survival required him to draw on a "demonic strength" that brilliant, mad Nietzsche  had lacked.
He kept seeing patients, but stopped lecturing at the university and ceased publishing for three years, no longer confident that he could make sense of things for other people. He had no mentor now, in the ordinary world. He sought stability through his family, his continuing work with clients, through painting and through "hewing stone", building a miniature stone village that he thought he was making in collaboration with his eleven-year-old self.
He realized that he had to reclaim beginner's mind. He said to himself, "Since I know nothing at all, I shall simply do whatever occurs to me." Then he took the shaman's plunge. "I consciously submitted myself to the impulses of the unconscious."
Central to Jung's ability to restore his inner compass was his daily recording of dreams. Now divorced from theory, his main preoccupation was to set down an unedited, uncensored chronicle of his experiences. "Dreams are the facts from which we must proceed." This was one of his central discoveries, and it is one of the most helpful statements that has ever been made about dreams and dreamwork. Let's start with the facts of the dream, leaving aside theory until we have recovered as much of the experience as possible.
This was confirmation for me of the method I was obliged to improvise in my own time of testing. I journaled my dreams and visions as exactly as possible, giving each a title noting the time and duration of each experience. I most required clarity when my experiences rebuffed interpretation and linear thinking. I found it essential to disentangle the reports of inner adventures from other material so that their nature and content was not blurred. I underlined Jung's statement that "otherwise the material would have trapped me in its thicket, strangled me like jungle creepers" and put a big check mark in the margin. Exactly right.
In his storms of emotion, Jung sought to let images take form. Images gave him a way to work with the raw power of emotion rather than being torn apart by it. He was learning how to harvest images and rework them through what he later called "active imagination" in the laboratory of his own psyche.
He recorded the facts of his inner experiences even when he found the content nonsensical, repugnant or freakish. In this way, he hoped that instead of being drowned by the contents of his inner life, he would gain a means of navigation.
He felt himself pulled into the Underworld. Instead of resisting, he let himself drop and began a harrowing journey of Underworld initiation, played out over years rather than hours, reminiscent of the shaman's path of tests and ordeals. In this time, he found an agreed form for an inner guide: an old man with the horns of a bull and wings of kingfisher blue that he named Philemon. "It was he who taught me psychic objectivity, the reality of the psyche."
Near the end of his life, Jung observed that "all my works, all my creative activity, has come from those initial fantasies and dreams which began in 1912, almost fifty years ago. Everything that I accomplished in later life was already contained in them, although at first only in the form of emotions and images."
He had had a plan for his life, to become a professor and pursue a scientific line that had seemed clear to him. "But then, I hit upon this stream of lava, and the heat of its fires reshaped my life." What overthrew his plans and expectations also gave him the prima materia for a greater life work. "That was the primal stuff which compelled me to work upon it, and my works are a more or less successful endeavor to incorporate this incandescent matter into the contemporary picture of the world."
On my own stormy path of initiation in 1987-1988, I felt immense affinity for the great shaman of the West who spoke those words, and took comfort and courage from his example. I felt the deep truth of his ringing assertion that "he who takes the sure path is as good as dead", and spoke those words aloud, as I walked with my dogs to the old white oak behind the house, and scrambled up the slippery banks of the creek to the highest of the waterfalls.

The most important statement for me in Memories, Dreams, Reflections is this:"All day long I have exciting ideas and thoughts. But I take up in my work only those to which my dreams direct me." This is equally true for me.
Many days a week I embark on research assignments that dreams have given me, often before doing anything else in a day. I dreamed of yesterday of writing a scholarly paper.Since then I have been investigating its subject: the life and mind of Princess Marie Bonaparte, Freud's patient and patron. Popups of synchronicity and the play of shelf elves in my large and lively home library give me further prompts for research when I am dreaming with my eyes open. Jung understood this very well too.