Ariadne and the Moon Bull that Came to My Town 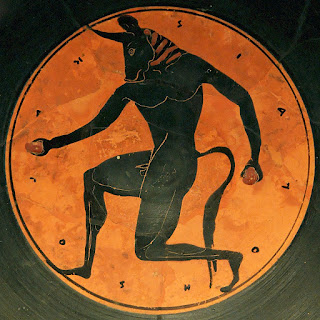 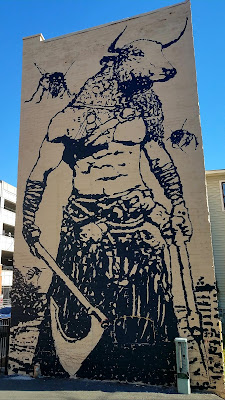 Then the Minotaur appeared, 30 feet tall, on the wall of a building half a mile from my home. We learned from a local news report that a downtown meadery called The Bull and Bee commissioned an artist to paint him. Unknown to me, this was accomplished in the dark the night before my class. The message, for me, is clear: when a mythic power comes after you, invoked or uninvoked, be ready for it to show up in the street.
Top image
The National Archaeological Museum of Spain in Madrid houses an Attic black-figure cup from around 515 bc with this painting ofthe Minotaur iniside. There are letters around the edge. start just before the Minotaur’s left foot and ead in a counter-clockwise direction and you will the Greek phrase, χω παις καλώς ho pais kalos, which translates as “I play well”. Maybe not would expect and a clue tyhat a sacred game is afoot. It may be a sexual come-on. Such cups were used in symposia where older and younger men and boys partied together.
Posted by Robert Moss at 12:43 PM

The bullseye in my heart has been struck once again. So much for me to ponder in this post. The Bull and the Bee mural showing up in your neck of the woods the night before your class is just so awesome. I like imagining that it was created in the dark. So appropriate for what can be taken away from the deeper meaning of it all. I'm actually going to a PBR Rodeo tonight in South Dakota called Unleash the Beast so it makes me smile to read this post. I will keep my eyes peeled for what shows up in my vision at the event. A bee, perhaps?