Borges and Lucy the Literary Cat 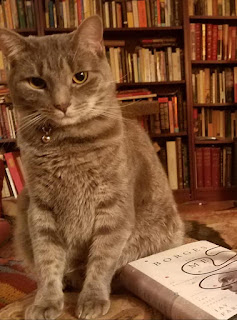 My cat Lucy showed her pleasure when I started reading a newly acquired book, Jay Parini's Borges and Me. This is a delightful memoir in which, as a young would-be writer from Scranton, Pennsylvania who had never previously heard of Borges, Parini finds himself driving the great Argentine author around Scotland in a tiny rust bucket in 1970.
Lucy sniffed and licked the spine of the book. She then posed for photos with it, unprecedented for a kitty who is usually camera-shy.
I had just been reading the chapter in which Borges stands up in a rowboat on Loch Ness to recite the song of creation that enrages the monster Grendel in Beowulf. In his excitement, he falls into Nessie's waters, blind and unable to swim, but is still undaunted when fished out, insisting that he has roused the Scottish Grendel.

Lucy had just begun to assert herself as a literary cat. The following evening, she made a strong effort to pull a book off the piano stool that (along with the top of the upright piano) serves as my book table in my reading corner. There are some sixty books in my piles of current reading. The book Lucy wanted was The Arabian Nights.
Having rescued The Arabian Nights, I reopened Borges and Me, again at random. I read about a remarkable synchronistic encounter involving a discovery in a copy of The Arabian Nights.
Borges has suffered a fall. The doctor who is summoned is a woman named Brodie.
The name excites Borges.
"Aberdeen?"
The doctor tells him her grandfather was from Aberdeen.
"Was he a missionary in Africa, then in Brazil?" Borges pursues.
Dr Brodie is stunned. How could the Argentine writer know? Her grandfather wasn't well known and come to think of it he may have been her great-grandfather.
"He left behind an abbreviated account of his travels," says Borges.
"This is true?"
"I would never make anything up. Unless, of course, the world failed to provide sufficient material."
Borges proceeds to explain that "one day in a library in Buenos Aires" he found a narrative written by Dr Brodie's ancestor stuffed between the pages of the Arabian Nights.
Slack-jawed the doctor admits she has never read the Arabian Nights.
Borges shakes his head. "One who has failed to read The Arabian Nights is, well, an innocent, and this is dangerous." 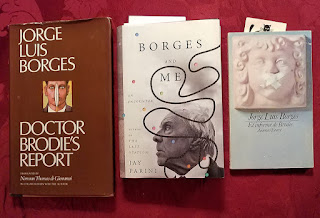 What he does not tell the lady doctor (and is not in Parini's book) is that he composed the "abbreviated account" he claimed to have found in The Arabian Nights as "Doctor Brodie's Report". It is the title story in a collection he had just finished translating with Norman di Giovanni. These were the first stories he had published in 17 years. I got my copies of the translation and the original Spanish edition down from the Borges shelf in my personal library.
Borges declared in his preface to the first edition of El informe Brodie that he now aimed to deliver "straightforward stories" that "try like those of the Thousand and One Nights to be entertaining or moving but not persuasive". Quieren distraer o conmover y no persuadir. "Doctor Brodie's Report"is a mock-realistic tale of a sojourn among primitive people - the Yahoos - who attract each other's attention by throwing handfuls of mud.
I could hear the Scottish doctor saying again in her brogue, "This is true?" 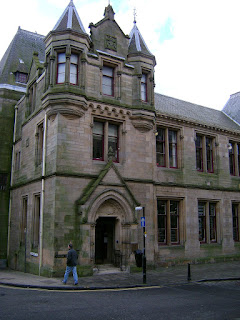 The following day I picked up Borges and Me again and read about Borges' visit to the Carnegie literary in Dunfermline. He not only sniffed the books, he licked one of them.
Parini recalls: "He picked a volume and began to greedily lick the spine, his tongue like that of a cat. There was, I thought, lust in his eyes."
When the librarian protested, Borges said "Some books should be tasted" and ran his tongue along the whole length of the spine.
Lucy knows.

Lucy is eyeing the Arabian Nights again. I open my edition - a recent translation by Hussain Haddawy - at random, always my preferred way to approach a book. I read the opening lines of the Tale of the Enchanted King, from the Twenty-Second Night:

My story, and the story of the fish, is a strange and amazing one, which, if it could be engraved with needles at the corners of the eye, would be a lesson to those who would consider.

Right before this we are given a frame for the tale, or rather a frame within a frame. Scheherezade must tell a story every night that will entertain the misogynist king; he will kill her as soon as he becomes bored. Within this frame we hear the story of another king who wants to know why a young man on the terrace of an impossible black palace has been turned to stone up to his waist.
The young man agrees to tell his story on one condition. He wants the undivided attention of his audience.
At the black palace, the half-petrified man tells the king, "Lend me your ears, your eyes and your mind.".
In the palace of the her tyrant king, Scheherezade knows her life depends in coming up with a tale that will hold his attention. I feel I know this situation intimately. 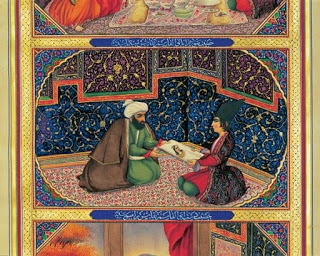 "Call me Scheherezade," Borges says to Jay Parini in 1970. I am back in the book whose spine Lucy licked. I am both shocked and elated by this find. I made the same statement five years ago, when I recognized that the myth I am living is that of the storyteller who must produce a new story fit for a king every night in order to stay alive. This is the theme of the first and last of the tales in my book Mysterious Realities. Now I discover that Borges beat me to this statement, by half a century. He added, according to Parini in Borges and Me, that "The Arabian Nights is the source of everything I do."
Posted by Robert Moss at 4:56 AM

I've long observed that there are living spirits in books that call us (or our cats) to buy them, read them, or just pay attention to them again. When I was a starving student, and couldn't afford to buy more than one book, I'd walk into a "spiritual" book store and listen for the spirit in the right book to call me. This method never failed. Now I'm an old man during a plague, but I still use the same method. So I'm buying your latest book. I'm delighted to make your acquaintance.