Feeling for Brussels: presentiment and prayer 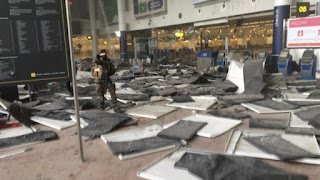 I've been hearing from people who seem to have dreamed the horror in Brussels at the time of the tragedy, or before it. F.W.H. Myers, the Victorian researcher who coined the word "telepathy", defined it as "fellow-feeling at a distance". As humans, we are connected to all things human and it is natural that some of us will dream and sense what others are suffering, even half a world away, especially if we have a personal connection to the places and people involved. Mass events throw a shadow before them that touches many, in dreams and in other ways.
Since the news of the terrible events in Brussels, I have been reflecting on my own strange experiences at Brussels airport last month, when I was changing planes. I was overwhelmed by horrible feelings of dread. As I walked to my departure gate, I started sweating more violently than ever before in my life. I told a friend afterwards that I was "sweating bullets". I slumped into a seat feeling that the world was about to end.I found my imagination lurching into a vivid fantasy of what it would mean to die here, in transit and in a state of confusion, and what it might take to make the right connection after death.
I am not a nervous flyer, and I catch many planes every month, generally relaxed and open to what the adventures may bring. I am now inclined to think that my terrible feelings and sensations at Brussels airport were an example of presentiment - of knowing something in the body before the event takes place that might cause those somatic conditions. And that my fantasy may have been advance knowledge of the immediate after-death condition of some of those who suffered untimely deaths. I will pray for them to find the right guides and the right paths on the Other Side.
Posted by Robert Moss at 3:02 PM

Last September, my coworker's 9-year old son died in a car crash along with his mother. Two months before the accident, I met the boy in his father's office. His first words to me were "Hmm, I dreamed of you." I couldn't get any details out of his dream, but I told him that next time he dreams of me please tell his dad about it so his dad can tell me. Before I left him that day, he added "I dreamed of you many times." That was the last time I saw him before the car crash. I was happily shocked that a young boy told me about dreaming of me in such serious tone. It must be important that he tells me this, but I don't know why. My dreams thereafter prepared me for the death of this boy. One dream shows that I drag his hand and run with him from a disaster. Another dream shows that I was doing a "death" pose in yoga exercise and I see a big bear. I remembered (thanks to you Robert) your teachings always encourage us to face the powerful animal not fear it. I open my arm and give the bear a long hug, a hug that leaves a strong sensation on my hand that was touching the fur on his back after I awoke. As I say goodbye I notice the bear's face with a white bandage across it. I drew the picture on my journal but not sure what it meant. After the car crash the mother died immediately, the boy was being treated for sever brain damage in the hospital. I went to his bedside, seeing the white bandage on his head, I realized then what the bear dream was about. After two days in the hospital he left this world. I have combed through all my dreams and encounters before and after his death. I only understand the warnings now. I wish I could prevent the accident from happening, but maybe I wasn't meant to do it. Maybe this is the lesson I have to learn in this life time.
Thanks Robert for your relentless teachings. I have read many of your books and have learned so much from them. I now know the meaning "dream is to wake up".

thank you this poignant and beautiful sharing. I totally understand how it feels to wish you could have prevented a death. In the 90's I attended a wonderful dream school with Robert. During a shamanic dream journey, I saw my family gathered around my niece holding hands. I drew a picture of this in my journal and labeled it "Thanksgiving Healing. " My niece was addicted to heroin, and I had the thought that we should gather round her and tell her we loved her. This was in September. My niece overdosed 3 days before Thanksgiving, leaving 3 small girls and a devastated family. Initially I reproached myself, but later realized that the inner healing had already taken place even as the shamanic journey revealed it. She knew she was loved, and I later had a dream that her house was on fire with all her children. She emerged up a flight of steps, threw her arms around me and said "We are all ok!"
"The kids are safe, and I am safe too....don't worry!"
Because of the dream school and other workshops I attended with Robert, I got grounded in my dreaming self for life, and have have tremendous support from the spirit world, the dead, the animals, and the cosmos. I thank him for his stamina in getting this work out to so many and for putting his work into print. The Dreamers Book of the Dead is a true guidebook, and always at my side. Many blessings on the path...may you walk in beauty and healing.
Linda Fialkoff