Anubis in the backyard 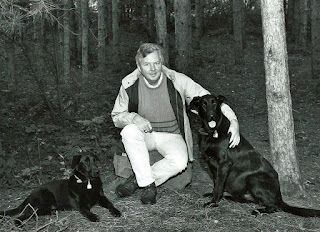 Thirty years ago, because of a white oak and a red-tailed hawk, I moved to a farm in upstate New York on the edge of traditional Mohawk country. I brought with me my two beloved black dogs, "Sag Harbor mutts" - part Labrador, part German shepherd, larger than either breed. When Kipling's ears stood up, I joked that he looked like Anubis.
On the night before Halloween that year, he got out on the road and was killed by a passing car. Shaking with grief, I wrapped his huge body in an old blanket, got him in the back of the battered Jeep - where he loved to ride - and drove, with a spade and mattock, up to the top of the hill on the north side of the house. I had often come here with Kipling to watch the rising of the moon. Sobbing, I dug a grave for my boy dog just outside the bounds of the human burial ground where the headstones of the first white settlers leaned at crazy angles.
I felt that something had been cut out of my heart.
However, I soon noticed that though Kipling's body was in the ground, he was very much still with us. Driving in the Jeep he loved, I once looked in the rearview mirror and saw him standing up, eager to see where we were. "Sit down, Kipling," I growled, before I realized that, in physical terms, my dog could not be there.
Others saw him too. His presence was so palpable that when my elderly mother-in-law moved to a downtown street-level apartment, I asked Kipling to watch over her for the first few days, until we were able to get her a watchdog of her own. Late the first night, she heard people she considered to be ne'er-do-wells on the sidewalk in front of her door. Then she heard a dog's deep-chested growl, rising to booming barks. Someone outside said, "Forget it, there's a dog." The curious thing, according to Mary, was that the barking seemed to come from inside her apartment.
My black dog's energy was with me in other ways, too, long after his death. I finally realized I needed to tell him it was okay to move on. I did this with an impromptu ceremony, barbecuing a steak for him on the deck, near the old loganberry tree. When I spoke words of love and releasing, the wind turned as quick as a kid on Rollerblades, and it sent the smoke skirring straight up the hill to Kipling's burial place.
Then my black dog started coming in my dreams. He appeared to me, running and hunting as he loved to do, on a mysterious island across a river, When I called to him, he turned but appeared not to be able to see me, as if he and his world were covered by some kind of shrink-wrap that was translucent only from my side.
Things moved along. His role in my dreams became one of a guide and ally, showing me things I needed to see but might not have noticed without his keen senses. Sometime he came out of a hollow tree, slicked with something sticky, like honey or amniotic fluid or liquid amber. He escorted me on journeys across perilous country, sometimes into realms of the human dead.
I began to understand why the Egyptians chose a black dog or jackal as a psychopomp, or guide of the soul on the roads between the worlds. Garbed in black, he moves easily through the dark places. His keen senses make him an excellent tracker and enable him to sniff out, and dispose of, dead meat and dead energy that the spirit is meant to leave behind. And of all animals the canids are those that are friendliest to humans.
After Kipling's sister Brandy died peacefully several years later, I dreamed that they were reunited in their spirit bodies and became one. When a black dog appears in my dreams and shamanic journeys now, I always pay very close attention, because I know I am dealing with Anubis in the Backyard. In the ordinary world, the appearance of a friendly back dog, especially under unusual circumstances, is a very good omen for me, road-tested over decades.

Text adapted from Dreamways of the Iroquois: Honoring the Secret Wishes of the Soul by Robert Moss. Published by Destiny Books.

Photo: with Kipling and his sister Brandy at the farm in 1986.
Posted by Robert Moss at 7:17 PM

A beautiful telling of the connection between you and your dear Kipling (Anubis), Robert.

That's an amazing story, Robert--and so comforting! I'm getting up there in years, and I know my guy, Mike, will outlive me. (That seems to go with the territory of being somebody's dog.) It's nice to think that our connection won't stop when I leave.

Hello. I seldom save books. I have moved so many times in my life, I find I like to keep things sparse. However, I saved your book, "The Three Only Things." I have been having very odd dreams, in which I feel actually feel the pain I am having in my dreams. I looked up the meaning on line, and a reference to your book popped up. I thought, yes! I still have that book. I dug it up and am reading it now.
In reference to your dog. I have a wonderful chocolate lab now, who never would have been with me had my beloved Australian Cattle dog not been hit by a truck. I witnessed the hit, and totally understand your story. For a year after, very odd things happened in our house; always something to do with an item of Diablos (our dog who passed). My husband (who does NOT believe in anything spiritual) and I witnessed a small toy move across the carpet. Just a few inches, but enough to make our hair stand on end. A leash went missing. We were sure we put in on the kitchen table and we found it days later in an odd spot in the basement. After Diablo died, I happened on the Bruce Springsteen song, "You're Missing." I do not listen to Springsteen, so this was, indeed, a sign I felt. My husband and I listened to this song constantly thinking of Diablo for weeks afterward.
Well, one year later, I was blow drying my hair. I had "Pandora" radio on, though I couldn't hear it since I was using the hairdryer. Something fell in the room. I heard a loud thud. I shut off the dryer. It was picture frame in which one of the pictures was of Diablo. And the song playing on the radio was "You're Missing." I realized it was the anniversary of his death. I knew then, it was his way of telling me, "It's okay. You can let go. I'm okay." I started crying. I truly let go that day, though I often think about him but it's rarely with sadness (though I still do feel sad on occasion). And that day, it was the final "hokey" thing that happened.
They are truly always with us.