Dreaming Back: Yeats on how the dead get their stories straight 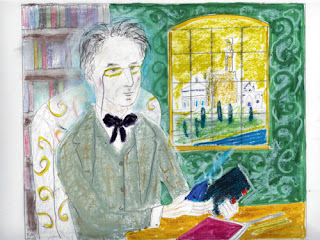 To understand the important things and live that knowledge, we need poetic clarity. When I was writing my Dreamer's Book of the Dead, I turned for that often to one of my favorite dead poets, W.B. Yeats.
Yeats’s fullest account of sleep and dream experience is in the 1925 edition of A Vision; unfortunately he dropped much of this in the greatly revised edition of 1937, where he substitutes an interesting but second-hand description of states of consciousness borrowed from an exposition of the Upanishads: “In the waking state the man uses all his faculties and is confronted by a real world, but the waking state is in reality a dream condition.” Beyond waking and dream, in this view, is dreamless sleep, in which the sleeper “desires no desires and sees no dream”, losing contact with desire. “Man passes from waking through dreaming to dreamless sleep every night and when he dies.”
The living and the dead inhabit all three worlds, and meet in the intermediate dream state. The dreams of the living are also the work of the dead, who use the living person to complete their life reviews – and, we might add, as vehicles to deal with unfinished business, satisfy appetites and desires and agendas they have not released, and for continuing enjoyment of the life of the senses.
Yeats describes an early phase in the after-death transitions that he calls Dreaming Back.

In the Dreaming Back the Spirit is compelled to live over and over again all the events that had most moved it; there can be nothing new, but the old events stand forth in a light which is dim or bright according to the intensity of the passion which accompanied them.

During this phase the “Husk” may or may not be discarded. His use of this term is blurry; sometimes he appears to be describing the dense energy body the Hawaiians call the “sticky self”, at other times an astral vehicle. Despite the confusions, Yeats is very clear on one point: "If the Husk…persist, the Spirit still continues to feel pleasure and pain, remains a fading distortion of living man, perhaps a dangerous succuba or incubus, living through the senses or nerves of others." This may be intentional persistence, which some have called avoidance of the “second death”

If there has been great animal egotism, heightened by some moment of tragedy, the Husk may persist for centuries, recalled into a sort of life, and united to its Spirit, at some anniversary, or by some unusually susceptible person or persons connected with its past life…    If death has been violent or tragic the Spirit may cling to the Passionate Body for generations. A gambler killed in a brawl may demand his money, a man who believed that death ends all may see himself as a decaying corpse.

"Where the soul has great intensity and where those consequences affected great numbers”, the Dreaming Back may last, with diminishing pain and joy, for centuries. Yeats pictures souls in this state tapping into the minds of the living, and reading letters and books through their eyes. With the help of “teaching spirits” a soul in this phase “may not merely dream through the consequences of its acts but amend them, bringing this or that to the attention of the living”
During this phase the dead often appear to the living in dreams. “It is from the Dreaming Back of the dead…that we get the imagery of ordinary sleep. Much of a dream’s confusion comes from the fact that the image belongs to some unknown person, whereas emotion, names, language belong to us alone.”
Following Eastern thought, Yeats sometimes seems to suggest in his later work that the dead we encounter in dreams are those who are still undergoing purification or re-education. But he accepts that the living also have contact with those who are on higher level, as his own life experiences amply confirmed. The idea of the Fourth State, turiya comes in (from the Mandukya Upanishad). In the state, reached through contemplation and wakefulness, “the soul is united with the blessed dead”.
-

After he died, I dreamt my father and we're in a ground level room filled with clutter, looking at a cabinet stuffed with old books, papers and records. He declared,"Ahh, I don't need any of that!", and stepped into an elevator which took him upstairs. Shortly after my mother died, she appeared in a dream, looking young and healthy, wearing a fur coat she had thought she'd never get to wear. She said she was okay, and Dad was waiting to take her away. Both dreams left me feeling at peace.

After my father died at age 91 1/2 (he was a skeptic--agnostic), I dreamt I saw him walking across a desolate barren landscape, wearing some kind of suit, and there were numerous other people who were dressed like him, more or less,and they were all walking numbly in the same direction.... it was not a happy dream! Perhaps it was some kind of Bardo....

A few days ago on the 7th anniversary of my mother's passing, I attended a classical spring concert. I had no one who wanted to go, so I decided to invite my mother who taught, performed and loved classical voice. Listening to the uplifting violin concertos by Corelli and Vivaldi and the beautiful harmonies of the choir, I released self-absorbed thoughts, and felt as if my mother was "ooing" with delight beside me. At the break, I saw a poster in the lobby entitled heaven, and children had drawn pictures of what heaven was like. There were children's handprints and brightly coloured bridges and rainbows. I also met a former student of my mother's who told me she kept her in her heart. I felt so at peace and the next day my husband told me when I got home from the concert I looked so young. I truly believe that we can communicate with the dead in positive ways. Your article is so intriguing and makes me want to investigate more.

That´s interesting to see how the agenda we follow in our lives on earth seems to continue after our physical death, at least shortly after the departure. My father really loved his work and when he was feeling the end, he just said how deeply he appreciated that he could actively do his profession till almost last days. It was why he felt his life was worth living: to cooperate with others and to be in some small way useful for the society.
When he left, in my first dream with him, the hospital room was changed. Instead of the bed and all belonging equipment, there were small hills of the ground with spirals. He was alive and vigorous again, saying something nice. In the second dream, a few days later, I saw the magazine with his face on the cover. It was a beautiful picture, so I curiously looked inside. There I found an article about him with illustrations. He was in the middle picture, sitting on the big rock, with the map, exploring some still unknown territory. What was even more heart-warming were pictures of older generation preceding him and younger generation following him. Exactly his idea of participating and being in the service for humanity.
I have no clue what is he up to now but I have a strong sense he works hard and makes others work hard :-).

Like Celeste, I have several times felt my father with me, savoring and thrilling to jazz music or classical guitar, or jazz played on a classical guitar. It is very strong, very real, brings tears to my eyes to share it with him and know we still have that bond. Thanks for reminding me of this, Robert. It's giving me renewed curiosity, receptivity to upcoming messages from him and others.

Thanks for all the rich experiences being shared here. Elyn, I would take that sighting (as it seems you have done) as a glimpse of my father's early post-mortem state, before he awakens to all the life options on the Other Side.

Celeste, that is a beautiful report of taking your mother to the concert. It certainly seems to validate the advice from W.T.Stead (which I quoted in the previous blog article) that "anyone who sits for a moment and allows his mind to dwell on some dear one who has 'died' will actually draw the spirit of that person to himself."

Rachel, as you describe the sense of your father drawing close when you listen to classical guitar, I feel heartstrings being played.

Nina, I have found it very interesting to track family members and friends as they move from one living situation on the Other Side to another. It is certainly my impression that we do tend to follow our ruling interests and desires in the first transitions, when we do not feel compelled to follow the ordinances of collective belief systems.

I appreciate this fascinating discussion of how souls may work through their issues, in part, through our dreams, and how that can be confusing to us since some of that material is not our own. Does this not raise the question of whether the soul is respecting our free will in using, even tweaking, our dreams? I would think this must be dealt with in some way at least on a higher level, perhaps between our higher selves, so that the free will of us the living remains respected. Can anyone help clarify on this point?