Pumping Gas with Catherine Deneuve on the road to Conscious Dreaming

It's twenty years since the publication of Conscious Dreaming. I am moved to retell the story of the dream that brought it into the world, and how, through the magic of synchronicity, I saw that dream played out on a movie screen.

We can ask for a dream of guidance on any issue that is facing us, and when we're lucky the dream can take us out of the boxes of the everyday mind's approach to that theme. A big example in my life as both writer and dream teacher was when I was in a quandary about how to move towards publication of Conscious Dreaming, the first of my books on Active Dreaming.
My literary agent at that time found a great editor for that book, and she was eager to publish. However, my agent had also asked a great deal of money for the book - startlingly more than is usually paid for anything on the field of dreams. He had asked my opinion about the number he had in mind. The question had made me queasy, because I had gone off on my own to write this book with no commercial expectations; I was simply doing the Work I was called to do.
Still, authors use agents to advise them on practical things like money, and I felt I could hardly ask my agent to ask for less money from a publisher than he thought he could get. The editor was shocked by the figure proposed; did we have any idea of the sales numbers for even the most popular books on dreams? She suggested a much lower number as the most her house would pay.
What to do now? Go touting my love-child around the town in hopes of big bucks? Troubled, I asked for dream guidance. I wrote down my intention:

Show me the best way to publish my book on dreaming.

I dreamed I was driving my regular car. I pulled up at a Esso gas station. It looked like something from an earlier time because of the name (Esso, not Exxon) and the vintage pumps and general look of the place.
I had some trouble filling up at this gas station. First, I overshot the pumps because my engine was overcharging. I had to back up. Next, I had a hard time getting the nozzle in the tank. It took time and patience to insert the nozzle and establish a good flow. The numbers on the gauge went up very slowly. At the end of this procedure, however, I had all the fuel I needed and took to the road in fine good spirits.
I woke up chuckling over the Freudian content some people would see in this dream. However, I did not feel that there was any sexual reference. Track your dream symbols over time, and you develop a sense of their personal meaning. In my previous dreams, what was going on at gas stations - when not a glimpse of a literal event - had usually spoken of issues concerning money and resources, energy for the life journey.
My practice is to write myself a one-liner, harvesting the central message of a dream report. This time my dream motto was a two-line summary along the following lines:

We are at the right place, but we are overcharging. We need to back up and use some finesse to get what we need. The numbers won't look good but we'll have all we need.

I called my agent and told him the dream. He chuckled, as I had done, over its possible Freudian implications. Then I read him my summary, as an action plan. I requested him to follow the exact guidance of the dream: to go back to the original editor, use diplomacy and make a deal even if the numbers did not look good at all.
He called me back to tell me the editor was now offering less than she had been willing to pay before, because we had turned down her original offer and talked of holding an auction. Did I really want to settle for an even smaller number? Absolutely. The dream counsel was clear.
So the deal was done. After nine months - the average period of a pregnancy - I had a beautiful fresh edition of Conscious Dreaming in my hands and was on my way to San Francisco as part of a book tour arranged by my new publisher. My publicity schedule showed me that I had a date with a columnist for the Contra Costa Times at the Embarcadero cinema. The columnist's signature ploy was to take interesting people to the movies and then use the film as a conversation starter over drinks or dinner at a restaurant. According to the schedule, we were going to watch a film titled I Shot Andy Warhol. I wasn't much interested in the movie selection, but was happy to follow the plan.
The night before the movie date, in a hotel near Chinatown,  I dreamed I was in a damp northern landscape where a willowy blonde resembling Catherine Deneuve was coming on to me, while people moved about under a forest of umbrellas. I was gallant to the Catherijne Deneuve character, but not especially attracted to her. I had no strong feelings about the dream. It felt a bit like watching a movie. I jotted down a quick report; that is daily practice.
When I got to the Embarcadero cinema, the columnist told me the schedule had changed. We were now going to watch the re-release of a classic French film, The Umbrellas of Cherbourg, starring Catherine Deneuve. It seemed I had previewed the movie the night before. But this was not the most interesting thing that unfolded in the cinema.
The Umbrellas of Cherbourg is outrageously Freudian. Every time an umbrella goes up or down, or a wine cork is popped, that's about you-know-what. I chuckled at alll the elbow-in-your ribs insinuations.
In the shaky plot line, the hero of the story, whose name is Guy, or Everyman, has a life dream. He wants to own an Esso gas station. When his life dream is realized, I found myself looking at the circa 1964 Esso gas station from the dream I had incubated many months before. This was  amazing confirmation that I had made the right choice. The dream I incubated led me to make a deal with the publisher who had now sent me to San Francisco to witness my dream played out on the big screen.
Had I been a Freudian, I might have missed the message of my dream of problems at the gas station. Yet Dr Freud got his moment, through the minds of the script writers of the film in which my dream was played out, nine months after the dream and more than three decades after The Umbrellas of Cherbourg was first released. 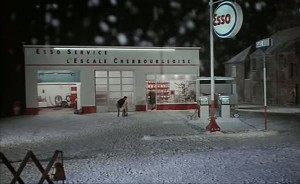 Good Morning Robert,
I was introduced to your work when I was given The Firekeeper last summer. I absolutely loved it, one of the best books I have read in a long while. It was especially interesting as I grew up in that area and enjoy reading about the history of the precolonial and very early colonial times of NY. The way you imagined us all into that world was really astonishing and well done. So now I am reading, working and playing with your book Conscious Dreaming. Wow. I will spare you the long letter I could write about beginning on this path of dream work. For now I just wanted to "honor the dream" I had last night by telling you about it, particularly because you were it.
I dreamt that I was going to meet a new baby. Not sure who her parents were or what my connection is to her. Not even really sure if she is a she. I am traveling, wearing a backpack and I get to your house where you welcome me and I take the the backpack off. You are seated at the bottom of the stairs blocking my path upstairs to where the baby is. It doesn't seem like you are intentionally or maliciously blocking the path, it is just where you are sitting. You have hurt your foot and are having trouble getting around. There may even be crutches near by. You are a very gracious host and ask if I am "one of those vegetarians that eats eggs". I reply that I am not a vegetarian but I am not really paying full attention to the conversation. I am looking up the stairs to where the baby is and am excited to meet her. That's it. So, thank you for your hospitality and hope your foot is ok. And Thank you very much for your writing and encouragement to follow a path that feels like the right one for me. Best wishes, Elizabeth Radliff