The dream calling of a Neoplatonist philosopher 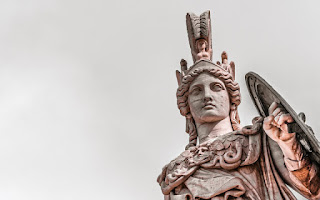 Proclus (412-485) , one of the greatest of the Neoplatonist philosophers, taught that the true philosopher should become "a priest of the entire universe", honoring all forms of the divine. He was an immensely prolific author, whose collected works - many of which were destroyed by religious book burners - were longer than those of Plato and Aristotle combined. He instructed that there are two basic aspects of soul in each human being: the "fallen" terrestrial soul, focused in physical reality, and the "celestial" soul or "true self" that transcends time and space and is the source of creativity and spiritual wisdom. As a teacher, he sought to guide his students into ever-closer alignment with this higher self, or "good daimon".

According to Marinus, his student and biographer, Proclus was called to his vocation in dreams. It was not an easy calling, since it connected him with gods and goddesses the triumphant Church was seeking to proscribe. But he believed that his dreams put him in contact with a lineage of teachers - the "hermetic chain" - who were able to communicate with each other across time and space.

The goddess Athena "appeared to him in a dream inducing him to follow philosophy". Proclus was born in Constantinople, but spent his early years at his family home in Lycia, the country of Homer's hero Sarpedon, beloved of Zeus. He had moved on to the great university city of Alexandria and was embarked on a promising career as a rhetorician when he accepted a friend's invitation to accompany him on a trip back to Constantinople. When Proclus reached his native city, the goddess Athena appeared to him in a dream in the form in which she was traditionally worshipped in the eastern capital. She instructed him to devote himself to philosophy and prepare himself for admission to the great school of Plato in Athens.

He had already received the gift of dream healing. When he was suffering from a serious illness as a child, a radiant boy appeared above his head. Leaning over Proclus' bed, his visitor announced his name - Telesphoros - and touched the child's head, releasing him from his sickness.

On his return to Alexandria from Constantinople, Proclus applied himself to the study of philosophy and mathematics under new teachers. Later he followed his dreams of the goddess to Athens, and studied with Plutarch, Syriacus, and other renowned philosophers. When he had completed his apprenticeship, he applied himself to seeking to understand the mythologies and Mystery traditions of both East and West through direct visionary experience. Much of his creative work flowed directly from meditative states, conscious dreaming and the twilight zone of hypnagogia. Long before he rose to greet the sun, "alone, in his bed, he composed hymns, and examined certain theories, and searched for ideas, which he later committed to writing at the coming of the day." [1]

Proclus continued to be guided by Plutarch after his teacher's death. In dreams, Plutarch gave him advice on the commentaries Proclus was writing on the Chaldean Oracles - and on the probable length of his own life. His later teacher, Syriacus, with whom he had disagreed over the interpretation of Orphic materials, appeared in a second cycle of dreams that deterred him from continuing with his work in this area. [2]

In other dreams, Proclus communed with earlier philosophers and received training in the school of Pythagoras. These powerful dreams convinced him that he had experienced a previous incarnation as a member of Pythagoras' circle.

Through dream travel, he experienced dimensions beyond the physical and evolved a personal model of the subtle bodies as vehicles of consciousness. At the age of 42, he returned from one of his dream excursions shouting these lines:

I am possessed by a spirit that breathes into me the forms of fire, which, enfolding and entrancing my spirit in a whirl of flame, flies towards the aether, and with its immortal vibrations reaches in the starry vaults. [3]

In his later years, racked by arthritis, severe headaches and bouts of depression - partly induced by Church attempts to suppress the cult of the old gods and Plato's Academy - Proclus again received the gift of dream healing. His headaches and his despair were lifted when a serpent sacred to Asklepios wrapped itself around his head. When he asked for a healing dream to relieve extreme pains in his legs, he was rewarded by a dream in which "someone returning from Epidaurus" (the most famous temple of Asklepios) kissed his knees. He woke free of pain and reportedly did not suffer "even a twinge" of arthritis throughout the rest of his life.

When he traveled, Proclus asked his dreams to guide him. He especially sought dream guidance on the spirits of the land: on the names, rites and sacred sites of the guardian spirits of each place. In Lydia, the gods or daimons of a defunct shrine revealed lost rituals to him through a dream.

Proclus even allowed dreams to dictate the manner of his burial. His old teacher Syriacus appeared in a dream to remind him that though they had had disagreements, they had once lived together as family and had agreed to share a double grave. Proclus gave the appropriate instructions and their remains were interred together in a double sepulchre.

While Proclus' major life choices and most enduring work were inspired by dreams, his biographer notes that he did not allow himself much conventional sleep, regarding long periods of sleep as a symptom of "psychic laziness". His most powerful experiences appear to have unfolded in hypnagogia - the fertile space between sleep and awake - and in conscious dream excursions beyond the body.

In his commentary on Plato's Timaeus and in other surviving works, Proclus left us a precise anatomy of soul and spirit, a Western counterpart to descriptions of subtle bodies or "sheathes of soul" in Eastern literature. Proclus may have been the first writer to use the term "astral body" though its meaning for him was different from its common usage today. For Proclus, the astral or "starry" body (astroeides) is a vehicle in which the soul descends from higher planes to animate a physical body, and also a vehicle in which it ascends after death or in transcendent experiences.

In its descent towards physical incarnation, the soul takes on various garments (chitones) or vehicles (ochemata). These are material, as the body of flesh and bone is material, but woven of finer stuff. Among them is a subtle body associated with the breath (soma pneumatikon) that is also a vehicle of appetite and desire. It survives physical death but will decompose, in the natural course of thigs, when the soul has moved higher in its "starry" form. In this view, what follows physical death is a kind of spiritual striptease: an ascending soul casts off garments one by one, to rise higher in its vehicle of light. [4]

Proclus' insights are no more the product of abstract speculation than Plutarch's vivid account of spirits of the departed and daimons residing in the astral sphere of the Moon. [5] Both philosophers seek to describe what they have experienced through direct vision, especially in the most natural form of altered consciousness: dreams and half-dream states. Proclus' language is difficult, but it is well worth the effort too recover the essence of his teachings. He is one of the lost teachers who can help us relate our contemporary adventures in the multiverse to ancient Mystery traditions and the kind of philosophy that is truly the love of Sophia.

4. cf. E.R. Dodds, "The Astral Body in Neoplatonism". Appendix 2 to Proclus, Elements of Theology (Oxford: Clarendon Press, 1992. For a pioneer attempt to restore these teachings, see G.R.S. Mead, The Doctrine of the Subtle Body in the Western Tradition (London: John M. Watkins, 1919).

Chills with this one! :)