" I am your double from the jinn" 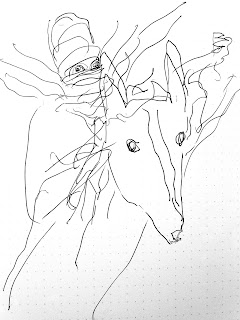 Kuthayyir 'Azzah was born in Medina and died there in 723  after many years in Egypt. He had the ear of caliphs of the Umayyad dynasty, was favored by courtiers for his flattering verses, and was no stranger to the charms of women. He became famous for his ghazals, songs of love and longing, often spiked with the absence of the lady he thirsted for, graceful as an antelope, fleeting as a raincloud over the desert - and unfortunately, wed to another man. His poems survive in palaces including the library of the Escorial in Spain.

When asked for the source of his poetic inspiration he gave a stunning response. He did not mention a lady, or the voices of birds or a rising flood inside him. He spoke of his double in the world of the jinn, a world normally invisible to humans where great games are nonetheless in play. Amira El-Zein tells the story in a wonderful book on “the Intelligent World of the Jinn":

Umayyad love poet Kuthayyir 'Azzah (660-723) was once asked, "When did you start reciting poetry?" He replied, "I did not start reciting poetry until it was recited to me." Then he was asked, "And how was that?" He replied, "One day, I was in a plane called Ghamin, near Madinah. It was noon. A man on horseback came toward me until he was next to me. I looked at him. He was bizarre, a man made out of brass; he seemed to be dragging himself along. He said to me, 'Recite some poetry!' Then he recited poetry to me. I said, 'Who are you?' He said, 'I am your double from the jinn!' That is how I started reciting poetry."

As for those songs of longing: poets and dreamers know that yearning for a lover who is far away may loosen the soul from the body and launch astral flights.