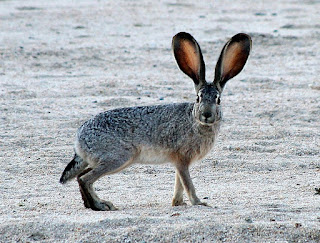 I was staying outside Santa Fe in an adobe house with extraordinary views across desert and mountains. The phrase Big Sky really applies here - you can watch the weather rolling in from fifty miles away. The night sky is extraordinary, a grainy, pulsing field full of animate energies. Nature feels quite personal here.

I went out to the Bandelier State Monument, to visit the sites of the ancient and mysterious Anasazi people. I had two of those encounters with spirits of the land of the kind that are the stuff of dream archaeology.
On the trail to the falls, I felt the mountain lion energy very strongly. Further along the trail, I lay down under ponderosa pines. I immediately sensed a presence. Scanning with my inner senses, I tracked it. Among the trees, a little person took form. He was very dark-skinned and no more than four feet tall. He was willing to give me a name, speaking the five syllables slowly and distinctly, so I could pick them up. I will not publish his name here; traditional peoples are very sensitive about the power of names.
The name and the nature of the little man were connected with Rabbit. He could run like a jackrabbit. I saw him hunting small animals a long time ago, living very close to the earth. I asked to enter his Dreamtime and slipped inside the world of the animals. He belonged to a time when human and animal consciousness were not as separate as they are today, and when forms were not fixed. He seemed to be able to shapeshift his physical body as well as his energy profile into animal forms. I was attracted by his simplicity. There was even a sense of innocence in the just-so-ness of his relations with the land.
I encountered a different presence as I stood  in front of the petroglyphs at the “longhouse” site - apartments built into the talus of a volcanic cliff - at the Anasazi village. A Gatekeeper figure emerged. He told me that white people still know next to nothing about what really went on here, but that he would show me certain things, under certain conditions.
The wall opened to my vision like a window. I looked into the scene of an ancient rainmaking ceremony. The priest held up and vibrated a large stuffed serpent while a helper made the sound of thunder crashing with something resembling a mortar and pestle. I was shown the methods this ancient people used for appealing directly to the animate forces of nature. My tour expanded. I enjoyed looking into the everyday lives of these ancient ones, their foods and cooking methods, their rituals and their delight in theater and music.
I recalled that the First Peoples of my native Australia talk of the Speaking Land. The spirits of the land are talking, talking. All we need to do expand our awareness, and listen without judgment. I felt privileged to have been invited into a space between the worlds to learn the ways of two ancient peoples of the American Southwest.

- from my dream archaeology casebook (2001).
Jackrabbit photo by Jim Harper

I deeply appreciate you revealing this way of seeing. It meets with a sense of knowing I've had but have not clarified. And New Mexico! This is why I moved here.

The beings around the southwest native sites are fascinating.

Last year I took some friends out to the southernmost jumpoff into canyonlands, and hiked in part of the day with them.

We had lunch near bear prints in the mud where the creek reached the slickrock and spread out into a small waterfall, looking out over wild bubble towers of sandstone, halfway down their descent to the main canyon bottom.

Returning to the rim of the canyon alone, I saw someone behind me. I turned to 'see' a 9' tall humanoid being with two enormous horns, a sort of gatekeeper or guardian of the place. He was old. He didn't say anything, just watched me.

I found him again that night, drawn huge on the wall of one of the bathrooms in the campsites above Moab. I used to always be terrified in these places, because I could feel 'others', but I couldn't see what was there yet.

I guess now I know why.