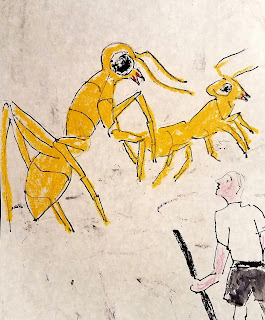 In the immrama, the Celtic voyage tales, the heroes know they are not in Ireland any more when the relative scale of things changes dramatically. Thus Maelduin’s party comes to an island where the ants are the size of calves. I notice this shift in some of my own dream travels and wonder how common it is for others.

A shift of this kind can be a lucidity trigger. Beyond getting us to ask, Am I dreaming? it prompts the larger question, What world am I in?

In a dream a few months ago I came to the mouth of a treasure cave where the sentinels were golden ants the size of wild bulls. I wasn't scared of them, though I was ant-sized in proporton to them. I thought they were a marvelous specimen of the Dwellers at the Threshold that often challenge our forward movement at important life passages, to ensure that we have the craft and the courage to get us through what lies ahead. I gave them that name in my personal deck of Oracle Cards.

In a dream last night, the shift involved the relative scale of landscape rather than creatures in it, a gentle example of the phenomenon.

Why I Didn’t Get to the Changing Room

I have ten minutes before I pick up my daughter and I am determined to get in a fine blue pool. It’s late in the season, and cool, and I can have the pool to myself. I see some rest rooms that look like white cottages, a short walk away and hurry in that direction to put on my swimsuit. The distance is much greater than I had realized.

What I thought was grass turns out to be the green slope of a mountainside. To get to the top I have to climb over three security fences. Now there is a lake in front of me. What I thought was a pebbly beach turns out to be a tumble of giant boulders. I have to get across the water. I’m not worried because I am still a strong swimmer – until I get in and find that there seems to be an unseen wave machine continuously generating high surf.

I have to work realty hard to get to the other side. I must then clamber up more giant boulders. At the top I look back at the pool where I wanted to swim. Its blue expanse fills the horizon. It has become an inland ocean.

Feelings: Excitement, wonder. Been there, done that.

Reality: I have been in wave pools and could be in one in the future. I also know an Otherworld location with a gentle version of a wave pool. Last night's episode feels like a preview of possible transitions in this world, and others.

I am remnded that some of my richest episodes of travel to another universe have started with the experience of becoming very small, eventually small enough to pass between the particles of an atom. I save my reports in a folder titled Incredible Shrinking Man. When you get smaller in a dream, it may mean the story is getting bigger.

"Dwellers at the Threshold" by Robert Moss