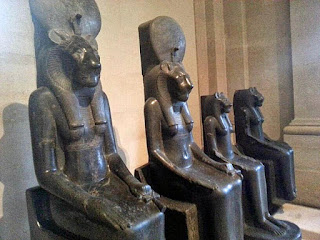 Sekhmet is much on my mind this week. Here's how it began. My main desk computer had a meltdown on Monday and the Geek Squad guy on the phone couldn't help me fix it beyond saying that the situation was "unfortunate" and "quite rare". So I rushed out and bought a new computer. I had only a couple of hours before a very important recording session to set up the new computer and remember all my passwords and download all the key apps. Paleo-Man here was sweating and still trying to figure out the audio settings by the time he had to join the zoom meeting room.
In this emergency, I abandoned my study and my normal home studio "set" and set up on the dining room table. My hosts observed that my backdrop - red wallpaper - was rather fiery. They could not see that at eye level, across the room from me, was a bust of Sekhmet that has been with me for a very long time. There may be a little more fire than usual in the program we made. 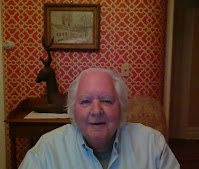 Sekhmet has a fearsome reputation. She is sometimes called the Eye of Ra, a title shared with Hathor in her warrior mode. The association between Sekhmet, Hathor and the Eye of Ra is dramatized in a text known as "The Book of the Heavenly Cow". The version we can read today is a compilation of tomb inscriptions from the period or Ramses II, but is much older.

The top god in the story, Ra, learns that humans are plotting against him because he has grown old. He is advised by other gods to mobilize his Eye, which has been used to maintain order and fight the forces of cosmic darkness. He plucks the uraeus cobra from his third eye and it becomes Hathor in warrior mode. She receives his order to destroy humanity and appears on earth as Sekhmet, an unstoppable, ravening lion.

While some humans are left, Ra relents. But he can't turn of the killing frenzy of hie Eye (Hathor/Sekhmet) until he has 7,000 jugs of beer dyed red to look like blood poured in her path. The Lady of Destruction likes a drink. She drinks until she passes out - which is why she is also known as the Lady of Drunkenness. When she wakes up three days later, her killing lust is gone and and humanity survives. 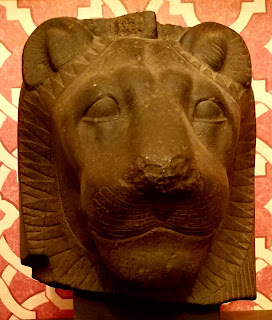 You can't keep a great goddess in a frame.Initiation into the realm of Sekhmet required braving up. During the Heb-Sed festival at Saqqara, devotees of Sekhmet guided a  shamanic rite of “passing through the skin” of Sekhmet in lioness form. This gave the right, in turn, to wear the skin. [1]

I have guided group experiments in shamanic lucid dreaming to enter the realm of Sekhmet, with all due respect and preparation. This resulted in personal blessings when I was in profound need of healing from a sudden and overwhelming health crisis in a foreign country. Here's the story.

I spent a very rocky night after my long journey from upstate New York to Istanbul. My body had been depleted by 23 straight hours of travel, more than half of it spent in the recycled air of airplane cabins. I had also been exposed to some rather murky psychic influences, not to mention a drunken neighbor who not only sprayed me with his miserable view of life but with some horrendous sneezing, insufficiently contained by the back of his grubby hand.
I found myself coughing and coughing, and by 3 in the morning the infection had rushed down my bronchial chords, hurting my chest and making me rush to the bathroom sink to throw up. I was appalled to realize that whatever infection had gotten inside me, my body's exhausted immune system was letting it go where it wanted. What to do?.
I lay on my back on the bed in my room and basically said in my mind, I could use a little help.
The image of Sekhmet, as I had met her and led others to meet her in a workshop called "Dreaming like an Egyptian" the previous weekend, filled my inner screen and brought all my inner senses vividly alive.  Her eyes were red as carnelian, red as murder, as one of her praise poems has it. She was mad at the agents of my infection. With her came a whole pride of lions.
They soon defined a field of battle. I understood that they were going to fight whatever was making me sick. Something slashed at me from behind. I turned to see a rabid hyena. Ah yes, the right form for an adversary of my lion protectors. Lions and hyenas are mortal enemies.
There seemed to be hundreds of hyenas, but they had no real chance against Sekhmet, in furious Eye of Ra mode, and her pride. The lions slaughtered hyenas until the survivors fled the field, then moved over the ground of battle licking up any nasty stuff that remained. I felt this as deep healing inside my body.
There was a small catch. I had been wounded by the hyena who attacked me from behind. But now Sekhmet tongued the wound, erasing it, restoring my energy field.
I turned on my side, profoundly grateful, knowing that the crisis was over. My immune system was fully functional again, and I had all the help I needed.
As I lay on my left size, a beautiful lioness my own size settled full-length on the bed, facing me. I felt the warmth of her body. I felt her breathing her energy into me. We lay together like lovers, hearts beating together.
I was more than fine on the rest of that trip after the lions licked the hyenas.
Imagery is healing. The trick is to find the right imagery that the body believes and will act upon without delay. It helps when you have reason to believe that greater powers are engaged.
I have learned that I have an imaginal metabolism, a mythic constitution. My body responds at astonishing speed to the images I permit it to entertain. When the images come charged with mythic, transpersonal power, they work wonders. My experience with Sekhmet and the sickness hyenas is one example. My book The Boy Who Died and Came Back contains many more. I think we are all alternately beneficiaries and victims of the power of imagination. We want to learn how to use it well, and how to draw on those greater powers. This starts with becoming more conscious of the stories we are living, and the images we invite to live in us.
1.Normandi Ellis, Imagining the World into Existence: An Ancient Egyptian Manual of Consciousness.  (Rochester VBT: Bear & Company, 2012) 286
The program we recorded under Sekhmet's eyes this week is a free introduction to my new advanced course for The Shift Network on Shamanic Lucid Dreaming. You can watch it and participate in a shamanic lucid dream journey on Saturday October 23.
Posted by Robert Moss at 11:05 AM