A dream is a place, and an awakening 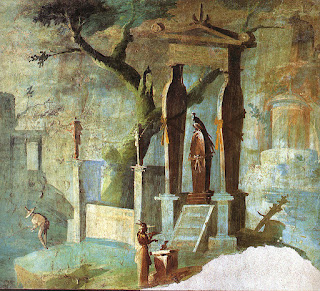 Notes on the nature and meaning of dreams from ancient Egypt, where they did a lot of dreaming.

Welcome, o dream, the one of goodness,
which is seen in the night and in the day.

A dream is an awakening

Two terms for dream are used in ancient Egypt. The more recent (qd) is translated as slumber. The older and more enduring term is rsw.t whose root means “awakening”. It is written in hieroglyphs with a determinative, at the end of the characters, that appears as wide open eye with makeup. It first appears in Letters to the Dead in the First Intermediate Period. It continues in Coptic. Kasia Szpakowska writes, “In Ancient Egyptian a dream can be considered something one sees upon awakening during sleep or is perhaps the very state of being aware, while asleep.” [ 1]

Awakening in a dream is like awakening after death. It is written of the resurrection of Osiris, “A tired god is waking up.” [2]

The Other World is inhabited by three categories of beings – gods, the dead and dreamers. The sleeper enters the primal ocean of Nun. When he awakens he is “over there”, in the other world, able to interact with its residents. [3]

A dream is a place

Rsw.t is a noun, a substantive, not a verb. It is a space and a state. You see something in a dream. You meet the Goddess, make love, feast or fight in a dream. The most common way to report is to say “I saw a dream” or “I saw in a dream” or  “It came in a dream.” When you have that sense that a dream is a space, it is easy to grasp that if you have been in the space of a certain dream, you could go there again.

There is no verb for “to dream” in Sumerian or Akkadian either.

The geography of dreams is related to geographies of the Duat, the “Over There”.  A dream is another world.

It was written in hieratic – a cursive form of hieroglyphs - on the recto of a papyrus whose verso (the side with the horizontal fibers, always inscribed first) contained an account of a battle written in the 13th c BCE.

It is not clear whether it was written essentially for the dream ritualist – the Scribe of the House of Life (or sesh per ankh) – or for a more general audience. Some of the items warn against entering the inner sanctum of a temple, and are plainly aimed at non-priests. But others prescribe apotropaic rituals for turning away psychic evil from “bad dreams” and seem intended for specialists. As with so many Egyptian texts, this is probably a collation of many separate documents. It may have been consulted by priests advising those who slept in temples to obtain dream oracles and to see the gods and the dead.

dreams according to the type of dreamer:

In the New Kingdom Dream Book, dreams are read very differently according to whether they are experienced by “Followers of Horus” or “Followers of Seth” (who are given to violent passion and ill-regulated lives)

If a man sees himself….

The arrangement is orderly. Down the right margin are the words “If a man sees himself in a dream”. The papyrus is read from right to left.

Next comes a summary of a dream. Then the pronouncement – “good” or “bad”. Then the interpretation.

If a man sees himself…

Drinking blood: Good. It means putting an end to his enemies

Copulating with a pig: Bad. It means being deprived of possessions

Seeing his face as a leopard: Good. It means authority over his neighbors

Copulating in daylight: Bad. His crimes will be seen by his god

Capturing a female slave: Good. He will get satisfaction.

“If a man see himself in a dream eating donkey-flesh: good, it means his promotion”

“If a man see himself in a dream shod with white sandals: bad, it means roaming the earth.”

Enfolding wings round himself.       Bad. He is not justified before his god.

It is clear, as in the older non-interpretive texts, that the dreamspace is shared by dreamers, the departed and the gods.

Ritual for dispelling the energy of an evil dream 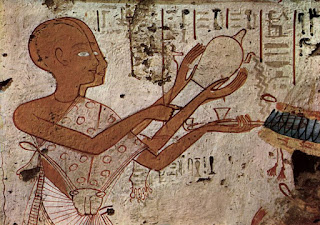 The “Horus” section in the New Kingdom Dream Book ends with a ritual to be used by a person who has experienced a dream portending evil. This involves (1) a cleansing action: the dreamer’s face is to be rubbed with fresh herbs moistened with beer and myrrh and with bread, to remove the contamination of the dream. And (2) an invocation of the goddess Isis, addressed as “Mother”; the dreamer tells his dream to the goddess, and the act of reporting is held to turn away the unwanted consequences.

In the Gardiner translation, says: “Come out with what you have seen, in order that the afflictions you saw in your dreams may vanish.” The ritual ends with a triumphal cry from the dreamer that he has dispelled an evil dream sent against him and is now ready to receive pleasant dreams. “Hail to thee, good dream that is seen by night or day!” [4]

The truthfulness of dreams

- Ammianus Marcellinus, soldier and historian, in his vast chronicle of the Roman empire, Res Gestae, written before 391. In it he describes the Serapeum of Egypt, where dream incubation was a popular practice, as one of the glories of the empire. The Serapeum was handed over to the Christians in 391.

3. Erik Hornung, "The Discovery of the Unconscious in Ancient Egypt" in Spring: An Annual of Archetypal Psychology (1986) 18-19

Top: Fresco from the Temple of Isis at Pompei depicting a ritual at the sarcophagus of Osiris. 1st century CE.