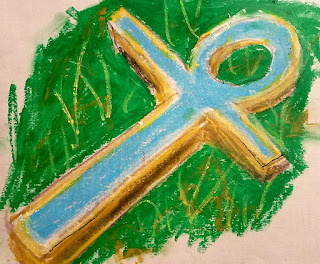 After a murky sequence in my dreams one night, when I needed to avoid various dangers and distractions, I found myself lying at the edge of the ocean in marvelous gleaming morning sunlight. With my legs in the water, I enjoyed the waves lapping over my lower chest, and the warmth of the early sun, turning the whitecaps of the blue sea into gold.

As I surfaced from this dream, I thought, What a perfectly simple and lovely image to linger in, for relaxation, cleansing and healing. So I stayed in bed, putting myself back into that gentle feast of color and rhythm. As I drifted in my conscious dream, a blue form separated from the blues of sea and sky. It moved like the finest silk and seemed to extend from shoulder-height into the sky. It seemed to me that it was some kind of pathway. I let myself join this blue light, and soon found myself enjoying wonderful kinesthetic sensations of flight. Soon I was winging over greenwoods, swooping low to enjoy the sights and smells close up. I was drawn to a town I did not recognize, where no one noticed me until a swarthy old man stared at me, his eyes fierce as a hawk. He beckoned me to a doorway where a beautiful younger woman - his daughter? - was waiting. Over the doorway hovered the energy form of an ankh, the Egyptian symbol of life. A new adventure was beckoning....

This is a simple example of how Active Dreaming works in everyday practice. You pick an image from a dream you would like to explore, or simply stay with, and allow a new cycle of conscious dreaming to unfold. The blue of the energy path that appeared spontaneously and led me to the Egyptian door was very like the distinctive "Egyptian blue" - whose blue derived from copper oxides like malachite - that you see on scarabs, and hippo sculptures, and fertility statues, and on the painted skins of gods and New Dynasty pharaohs, and on the djed pillar of Osiris. And on ankhs. I have seen ankhs that were used as water vessels painted this color. The idea was as you drank from them - whether plain water or a potion infused with crushed petals of the blue lotus, an oneirogen - you would take vital life force into your body.

In their dry country, the Egyptians dreamed the whole spectrum of blues. They prized lapis lazuli and azurite. They sought the origin of human life and purpose in a blue star from which gods descended (in some versions of the cosmogony) to Earth via the the Moon. In the Egyptian mind, blue (irtiu, khesbodj) is the color of heaven, of the primeval flood, life, rebirth, fertility and of the inundation that renews the land. A good color to dream on.