Gabriel has a sister 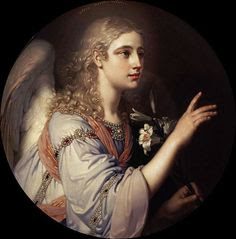 Never judge the depth of a dream by the length of the dream report. From my first cycle of sleep dreams last Sunday night, I harvested just one line, spoken to me by an unseen voice:

The Archangel Gabriel has a sister.

I was surprised, not least because in my first conscious visions of Gabriel, more than thirty years ago, I encountered a being of such feminine beauty that I was inclined to call him/her "Gabrielle".
One of those visions is indelible. Under bright sunlight, in front of an old white oak on the farm in upstate New York where I was living at the time, a being formed from condensed light, radiant and beautiful and winged. In the presence of this luminous being, I felt cleansed and renewed. My heart swelled in my chest. I fell to my knees on the dirt road by the cornfield, weeping with joy. A poem burst from me. I chanted it aloud, half-singing. When I returned to the house, I wrote it down, like this:

I knew something of Gabriel, All three peoples of the Book - Jews, Christians and Muslims - know this great angel. In all three traditions, Gabriel is the patron of dreams and of astral travel. Gabriel is the angel of annunciation. In Rumi's powerful vision of the annunciation, Mary is seized with terror by the coming of an immense power into her space. Fearful of violation, she flees from her body. The angel smiles on her and says (in my paraphrase): "You flee from me, from the seen to the unseen, where I am lord and master. What are you thinking of?"
Coptic Christians, I have heard, identify Gabriel with Anubis, who is also a patron of dreams and of travel between worlds.
I have met Gabriel many times since the vision under the white oak. In troubled times, the archangel has sometimes appeared armored for battle. In some visions, I have seen Gabriel as both male and female, light and dark - and as something before the opposites held in dynamic balance in this winged form. 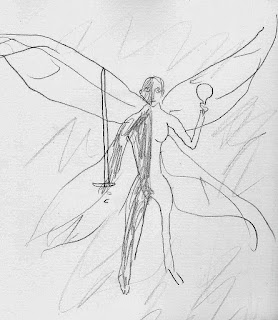 But what did it mean to be told, in this recent dream, that "Gabriel has a sister"?

I posted the one-line dream report on my personal Facebook page and received a bevy of suggestions from other dreamers, some of whom are steeped in angelology. The general view was that angels are neither male nor female but will exhibit forms adapted to the character and perception of the beholder. I recalled a remarkable and wildly funny story by Stephen Mitchell, the distinguished translator, in which Gabriel appears to him in such an alluring feminine form that he is possessed by lust.
My mind moved, like a long-legged dragonfly upon a pond, over all the associations.
Then I decided to share my one-line dream report with a dear friend who had been expecting a baby. She has very strong angel connections, and I have often joked that in her presence I find angels unavoidable.
Here is an excerpt from our email exchange:

RM (April 5): You may have seen this on my Facebook page, from a dream over the weekend:

The Archangel Gabriel has a sister. I was surprised to learn this in a dream last night, especially since in some of my visions Gabriel appears feminine

As I think about this today, I am wondering whether you have news of the bright angel who is coming into the world through you.

Friend (April 7): This is amazing.

First - yes, my beautiful daughter landed on the 5th of April, the day you wrote to me. She is wonderful - and we are enchanted by her presence.

Second - a few days before birth, I had this dream:

I was in a long line, in front, waiting to enter a beautiful, white church. As I am almost at the entrance, I am wondering what I am doing there. I see then that I have in my right hand a piece of paper. A single word is written on it: Gabriel.

Yes angels are. And I see that my dream of Gabriel may have been a dream of annunciation. Gabriel ("the seer of the Virgin" in an old Irish blessings) is good at that.

Images (1) Icon of the Archangel Gabriel from the royal gates of the central iconostasis of the Kazan Cathedral in St.Petersburg (2) RM drawing from a vision of Gabriel as male and female, light and dark.
Posted by Robert Moss at 4:33 PM

I have a friend who is called Gabriela (female version). When she was a young girl, she didn´t like her name at all. The story goes that originally a different name was chosen for a baby, but unfortunately after the birth there was a serious complication and her mum couldn´t recall the agreed name. Gabriela came to her and so my friend got under the protection of that incredible, invincible energy. Later on in her life she had to overcome impossible health conditions. Now she is well and radiates inner qualities, which are only rarely found in us.
Maybe something from archangel Gabriel´s energy of a very deep acceptance of a life mystery.