Tracks of Ceridwen and Celtic heroes in Prague 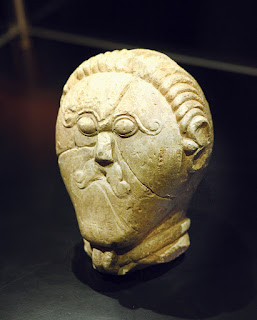 There are four ways to enact and embody a mythic story, one of the kind that may be missing from history but are always going on. The first way is that of the Minstrel, the second is that of the King.

The Minstrel roves and rambles, using humor and nudge-nudge suggestion to get some laughs and disguise the cutting edges of the tale. He reads aloud from a text couched in antique language that is hard for modern listeners to understand. The text seems to be an early translation from the Mabinogion or a similar Welsh source. It speaks of Ceridwen, whose name is spoken here as Ceri-dew. There are lines like, “Ceridew did hie after him with her besom”.
I am eager for the King’s version, though this one will be darker. I do not recall the last two ways of engaging with the myth, but surely a Priestess will take charge at some point. And perhaps we will even hear from a poetic Mage.

Feelings: intrigued by this fresh invitation to dream archaeology.


Reality: It’s not really strange to dream into Celtic traditions on my first night back in Prague. There were large Celtic settlements – known as oppidums – in and around Prague in ancient times. The Celts came to Bohemia in the fifth century BC and a Celtic tribe, the Boli, gave Bohemia its name. There is a stone sculpture of a Celtic warrior head from Msecke Zehrovice, near Prague, in the Národní Muzeum, together with many other Celtic finds.
One of the great shapeshifting stories from world mythology is the Welsh tale of Ceridwen’s pursuit of Gwion, the boy who swallowed the magic drops from a potion she was brewing in her cauldron of inspiration and intended for another. The wrathful witch-goddess hunts him as a hound chases a hare, as an otter goes after a fish, as a hawk pursues a bird in the air. At last the goddess swallows Gwion as a hen gobbles a seed of corn. Rebirthed as a beautiful radiant boy, he survives to become Taliesin, “Radiant Brow”, the inspired Poet-Mage.

Photo: "Stone sculpture of Celtic hero" by CeStu
Posted by Robert Moss at 2:37 AM