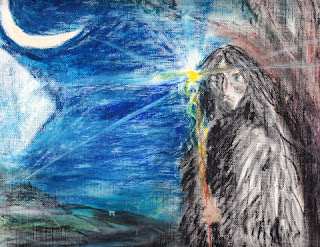 Merlin has a thousand faces. He is magician, enchanter, poet, trickster, prophet, wise or scheming adviser to kings, the hero or anti-hero of countless dramas and several TV series. In the Four Ancient Books of Wales, his name is Myrddin, but in later texts an L was substituted for the Ds – it is said – because in the ears of the Anglo-Norman nobles who read Geoffrey of Monmouth’s version in the 12th century, the old form sounded too close to the French merde. In Geoffrey’s Vita Merlini (c.1150) “ He was a king and a prophet, to the proud people of the South Welsh he gave laws, and to the chieftains he prophesied the future.” He is Welsh, he is Briton, he is Scots, he is universal.
Merlin is a dreamer, though in some of the ages in which he was remembered this was no term of praise. In Thomas Malory’s Morte Darthur, his enemies denounce him as “a wytche and dreme-reder”. In Shakespeare’s King Henry IV, Hotspur sneers at Welsh boasts about “the dreamer Merlin and his prophecies” and “such a deal of skimble-skamble stuff.” Merlin’s company is that of the awenyddion, or “inspired ones”, of whom Gerald of Wales wrote that “their gifts are usually conferred upon them in dreams.”
Merlin is a shaman, perhaps the very model of the Celtic shaman. I was greatly helped, back in 1985, by Nikolai Tolstoy’s book The Quest for Merlin, in which he tracks the shamanic Merlin’s phosphorescent footsteps not only through the literature but through the landscapes of the Scottish Borders, all the way to Hart Fell (“Deer Mountain”) where one of the Merlins ran wild with the deer, conversed with a tame wolf and a little pig, and shamanized by a chalybeate spring where the waters bubbled rust-red. This Dumfriesshire landscape is that of my paternal ancestors. Many  years ago – using Tosltoy as my Baedecker – I walked from the site of a ruinous battle whose expense of blood and kin drove this Merlin temporarily mad to Hart Fell, the mountain of his dreaming
As the legends and landscapes stream together in my mind, I see the Merlin I know and love as shaman – which is to say, arch-dreamer – in the following essential ways:

- he is born different from others (some say the spawn of an incubus, some of a golden one) yet cares for and helps and counsels those in need
- his calling is renewed by a spiritual emergency (his distress over a terrible battle and then the noise of the world)
- he is at home with the trees (he finds sanctuary inside an ancient apple tree, and feeds on apples and nuts, and shamanizes among oaks and hazels and birches)
- he knows the animals and can take their forms (he rides from his wooded mountain on the back of a stag, surrounded by a herd of deer)
- he knows the gates and paths of the Otherworld and can guide others along them (in one telling, he makes a narrow bridge between this world and an island on the Other Side)
- he sees the future, and can bring accurate knowledge of what is to come that is valued by others (a primary function of true shamans, as far back as we can know or imagine)
- he is master of story, poetry and song, through which bardic arts he can redefine and so remake the world around him
- through his own wounds, he finds the power to heal the wounds of others (he loses his mind, but regains it when his shining double, Taliesin, reminds him of the courses of heaven and earth in poetic speech, and so opens a magical spring – so Merlin can then offer the same waters of healing to another, to help him bring his spirit back into the body).

We are drawn to him by his company, of warring kings and lustful queens and questing knights. Yet Merlin, for me, rises beyond Arthur and Guinevere and Lancelot and the company of the Round Table, and even Morgan le Fay, though I dream of them too, and felt close to the knightly band when I stopped in Carlisle en route to the Scottish Borders.
We dream of Merlin, and it may be he brings dreams to us. My Merlin, lover of woods and deer and poetic speech, is not confined to the  ”glass house” where a lovely female apprentice is said to have confined him after she tricked him out of his master spells.
My Merlin travels with a magic orchard that goes with him everywhere. If you are very lucky, he may offer you an apple, either silver or gold. When you bite down, you’ll taste not only the sweet juice of the apple, but the heady power of a story – a story that will inspire you and give juice to your life – slipping into you. The dream shaman who gives us the right stories is the Merlin I follow.

Adapted from Dreaming the Soul Back Home by Robert Moss. Published by New World Library.