In the House of Madonnas 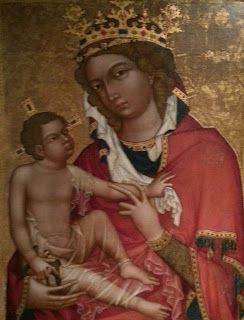 National Gallery in Prague, at the Convent of St. Agnes of Bohemia

In the collection of medieval Old Masters of Bohemia in the National Gallery, I did not expect to be excited by rows and rows of paintings of the most familiar scenes from the Christian story. Then I woke up to how the artists, confined to a limited list of approved subjects by the theology of the time and what their ecclesiastical and noble patrons were willing to pay for, gave flight to their imagination and human experience within the frames of the expected conventional scenes.
So here's a Jesus with a goldfinch in his hand. And here are any number of Madonnas, to suit all tastes in men and all the shades of belief and desire. Some are great queens in finery, crowned or double crowned. Some (especially those carved from wood) look like they have just come from the kitchen or from sewing, or from a romp in a hayloft or a meadow full of mushrooms and wildflowers. The Madonnas are blonde and dark-skinned, homely and breath-stoppingly lovely, willowy and buxom. 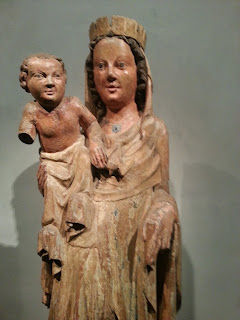 I start to imagine the artists with their models, with a wife or mistress or mother, or that peasant girl who is entering the fields of love and art for the first time, when the harvest is golden over the land. The theme of the Madonna as mistress in these images from the late 14th century is nowhere as shockingly explicit as in France a century later, when Jean Fouquet painted Agnès Sorel, King Charles VII's favorite mistress, as madonna lactans. I feel a wave of empathy as I see how human love charges divine love in the Bohemian collection, and how the creative imagination of great and original artists dances through the fences of prescribed forms. And I remember that the Goddess takes many forms. 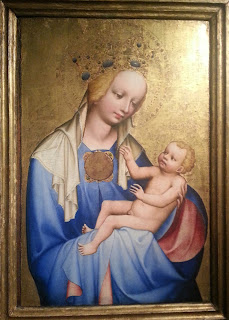 Photos by RM
Posted by Robert Moss at 1:53 AM

Hey Robert! I love love love your work. Quick correction from an avid birder - the bird Jesus is holding is not a waxwing sp., but a Eurasian Goldfinch. Thought you might find that interesting!
Come to Canada soon!!
Louis

Got it. Thanks, Louis. I was misdirected by some catalog copy.