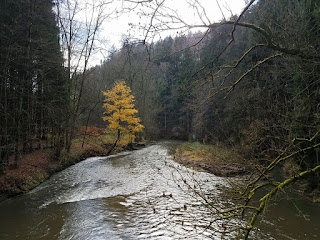 The Inuit say that we need to entertain the spirits, including our own creative spirits, and that one of the best ways to do this is to produce “fresh words.”
They help prevent our gods from becoming tired and dried up in the way that Rilke warned about in “Migration des Forces”, one of the poems he wrote in French:

Some of our gods become tired and dried up,
sterile and stiff-jointed;
so into others, murmuring, rushes the fresh spring
of a refreshed divinity. 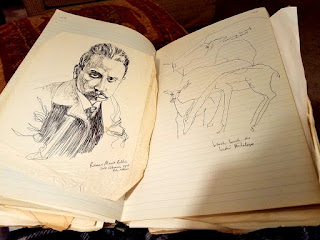 Drawing of Rilke I placed in my journal when I was 19.

Among the Inuit, the strongest shamans are also the most gifted poets. One of the reasons their spirit helpers flock around them is that they are charmed and exhilarated by the angakok’s poetic improvisations. Inuit shamans have a language of their own, which is often impenetrable to other Eskimos. It is a language that is never still. It bubbles and eddies, opening a whirlpool way to the deep bosom of the Sea-goddess, or a cavernous passage into the hidden fires of Earth.
Our earliest poets were shamans. Today as in the earliest times, true shamans are poets of consciousness who know the power of song and story to teach and to heal. They understand that through the play of words, sung or spoken, the magic of the Real World comes dancing into the surface world. The right words open pathways between the worlds. The poetry of consciousness delights the spirits. It draws the gods and goddesses who wish to live through us closer.


Yaminahua shamans in Peruvian Amazonia use complex, opaque metaphorical language in their power songs, which are their most important tools for journeying and opening an interactive space with the spirits – and for bringing energy and healing through. This is called, literally, “twisting-twisting words”. One shaman explains that with ordinary words, you’ll “crash” in this deeper reality; “twisting words” let you circle around and see.
Wherever the old ways of dreaming and soul healing are still alive, poets of consciousness - those born and dreamed to be our shamans and Speakers - know what this means.We'll never be able to travel the song lines and the story lines into the space where worlds are made and can be recreated until we come up with our own fresh words.
We need fresh and twisting words to change and twist the behavior of the body, in the direction of health, and to re-weave tangled or torn energy webs. We need to twist and shout our way out of the boxes, constructed by limited and self-limiting belief systems, that we sometimes mistake for home.

Photo at top: Fox Crossing on the Metuje River in Bohemia by RM