Flying with the Library Angel 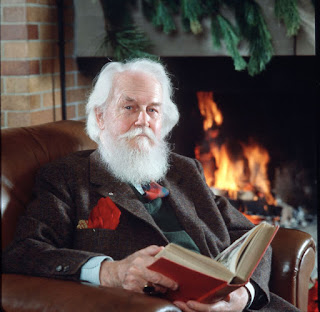 It was probably that literate spirit Arthur Koestler called the  Library Angel who was my unseen companion on that passage in the Bardo of Air Travel. My in-flight reading was Stephen Greenblatt's Will in the World, an excellent study of how Shakespeare rose from obscure origins. After I took my aisle seat, the fellow by the window asked how I was enjoying the book. Quite soon he was telling me how he was in Stratford the previous year when the news broke that a hitherto unknown portrait of Shakespeare had been identified in an Irish country house and was then on its way to the bard's birthplace.
My literate rowmate proved to be an artist and glass-blower. He gave me his card, which included the following self-description:

This was one of the best three word self-definitions I had come across. He asked me to define my own work, and then asked me to explain the application of Active Dreaming techniques to healing. I spoke of how dreams diagnose illness and can be a factory of imagery for self-healing when symptoms develop, I recounted some personal experiences of growing and then transferring healing images to cancer patients. With deep emotion, the man told me he was flying to the West Coast to support a family member who was undergoing treatment for cancer. He jotted down the book titles I had mentioned.
Our conversation was interrupted by the arrival of a young man who took the seat between us. More introductions ensued. The young man told us he was a vocalist who had sung with his college choir across the British Isles, and in many other places.
I asked him whether it is true that composers tend to look down on librettists to the extent suggested in Robertson Davies' novel The Lyre of Orpheus, which I had finished the night before. He was unfamiliar with the novel, so I explained the plot, which turns on the creative pains and misadventures of an unlikely crew who set about trying to make an opera out of sketches by Hoffmann, with an entirely new libretto, while the long-dead composer watches from the limbo of composers who are waiting for someone to complete their unfinished work.
"E.T.A. Hoffmann?" the new graduate echoed. "We studied him in my last semester." He gave me a rundown on Hoffmann's musical oeuvre, and asked about Hoffmann's second career as the author of dark fantasy stories, which were based in no small degree on his dreams and nightmares and sightings of apparitions, including several versions of the double or doppelganger.
He spoke of a piece his choir had sung in his last concert, with lyrics from Goethe. His face fell when he added that the brilliant young composer was struggling with cancer. He had heard the tail end of my account of using dreams to develop imagery to help cancer patients, and asked me to repeat the book details.
The bookish spirit with us on the flight was notably literate, far-traveled and caring.