Amnesia and Anamnesis: The Journey of the Forgetful Envoy 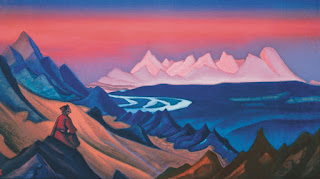 Life is a process of remembering and forgetting, forgetting and remembering.
The theme of the forgotten mission is beautifully conveyed by the “Hymn of the Soul” in the gnostic Acts of Thomas. The hero is sent from the East into Egypt in search of the Pearl beyond price, which may be his own Higher Self. Drugged by the food and drink of the country where he now finds himself, he forgets who he is. From the distant land from which he has come, the king and queen and “all the princes of Parthia” send a message to awaken him to the memory of who and what he is and recall him to his forgotten mission.
The same theme resonates, in modern dress, in Doris Lessing’s allegorical novel Shikasta. An envoy is sent to Earth from a higher civilization in a distant galaxy. To reach his destination, he must pass through a vast waiting area, a plane of mists and illusions, where souls wander between incarnations. On Earth, the envoy succumbs to the miasmal conditions; he forgets who he is and why he has come. An new envoy must be sent to remind him.
Does the story sound familiar? It could be yours. It has certainly been mine.
One of my favorite literary versions is Herman Hesse's novella The Journey to the East.  In a time of social collapse, when "there was a readiness to believe in things beyond reality", the narrator joins a pilgrimage to the East under the guidance of a mysterious order described only as the League. He journeys far in search of his spiritual home and regains the knowledge of essential things, such as his purpose for living. However, when he returns to his former environment, he loses his journals and souvenirs and begins to doubt whether his experiences were real. People around him don't believe his accounts. Soon he succumbs to their skepticism. He wonders whether the League itself is only a figment of his imagination.
But the League has not forgotten him. He is one of its own. He is invited to read his personal file in the League archives. He discovers that four centuries earlier, in another lifetime, he also belonged to the League. He is ashamed. How could he possibly have forgotten this? In a secret alcove, he is permitted to draw back a veil and makes his most extraordinary discovery. It is a small statue that proves to be two figures in one, joined back to back. One of the figures is the traveler himself. In the other, he recognizes the features of the guide who led him on his journey to the East.
As he studies the twinned figures, amazed, the statue comes to life. His own image melts and flows into that of the guide. It seems that, when fusion is complete, his ordinary self will be absorbed into the larger identity of the guide, the form of a Higher Self.
Like Hesse's League, our true spiritual teachers do not forget. When we open ourselves to the possibility of remembering who we are and what we might become, they communicate clearly. To receive their knowledge — and recover the knowledge that belonged to us before we came through the tunnel of the birth canal — we must be in a corresponding state of consciousness. As Anaïs Nin remarked, “We do not see things as they are; we see them as we are.”
Ordinary consciousness is a candle bobbing on a dark river, casting an inconstant circle of light across the water, in which an occasional creature from the deep can be glimpsed indistinctly. The river is vast, flowing into a boundless ocean. This is the sea of the greater Self. We cannot see it by the light of our daily trivial mind, which scarcely combs back the darkness.
When I was a lonely adolescent in Australia, an inner guide who appeared to me in the form of a radiant young man from the eastern end of the Mediterranean reminded me that the knowledge that matters comes to us through anamnesis. The word literally means "remembering", the antithesis of amnesia. For Plato and the neo-Platonists, it means remembering the knowledge of mind and spirit that belongs to us on a higher plane, knowledge to which we had access before we came into our present bodies.
Humans are forgetful animals. We forget and remember, remember and forget. Yet our true spiritual teachers stalk us in dreams and speak to us in liminal states of consciousness when we turn off our routine soundtrack and can hear a deeper voice.

Part of this text is adapted from chapter 14, "Soul Remembering" in Dreamgates: Exploring the Worlds of Soul, Imagination and Life beyond Death by Robert Moss. Published by New World Library.

Art: "Song of Shambhala" by Nicholas Roerich
Posted by Robert Moss at 10:11 AM

Beautiful and wise... Needed.
thank you.

Yes, I agree with 1st comment. Your blog nourishes the spirit with delight on many levels, especially literary. Thank you.

And Nicholas Roerich's mystical artwork is, I feel, worth exploring.
A museum of his work and writings can be visited in NY city.

Your post is refreshing and gratifying to the seeker's heart.


I Can't Be More Than Happy on the way Dr Obasi helped me to get back my Boyfriend My name is Elena Scott Dr Obasi cast a spell on him, I felt like ending it all, i almost committed suicide because he left me with nothing, i was emotionally down. But all thanks goes to Dr Obasi, who i met online on one faithful day, as I was searching for tips to get my girl back to me, I came across several testimonies about this particular man. Some people testified that he brought their lover back, some testified that he prayed to stop divorce and get a good paying job and so on. He is amazing, i also come across one particular testimony, it was about a woman called Stella Kyes, she testified about how he brought back his lover in less than 3 days, and at the end of her testimony she dropped his email After reading all these testimonies, I decided to give it a try. I contacted him via email (obasispelltemple@gmail.com) and explained my problem to him. In just 6 days, my husband came back to me. We resolved our issues, and we are even happier than ever. Dr Obasi you are a gifted man and thank you for everything you had done in my life. If you have a problem and you are looking for a real and genuine spell caster, Try him anytime, he is the answer to your problems. you can contact him on email: obasispelltemple@gmail.com and he will help you solve your problems.you can also call him on his Mobile:+2349065671269 Best Regards