"Thank you for dreaming in our ancestral ways" 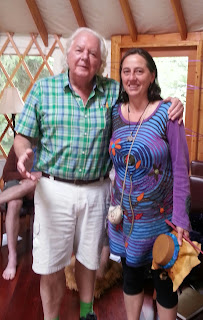 I know it is hard for some people to grasp how an Australian outsider came to find himself in the position of helping to restore lost or interrupted dreamways to Native American peoples whose ancestors called him to this work in dreams. The story is not an ordinary one. I did not go looking for the ancestors of the Onkwehonwe (the Real People, called Iroquois); they came looking for me.
When I moved to a farm on the edge of traditional Mohawk country in upstate New York, I started dreaming into the lives of people who had lived seven generations before me - above all into the life of Sir William Johnson, an Anglo-Irishman who lived with the Mohawk and became King's Superintendent of Indians, and a Mohawk clanmother and "woman of power" who sought to influence him for the good of her people.
The Mohawk woman called me in a lucid dream, to a meeting where she showed her wampum credentials as Mother of the Wolf Clan. She insisted that I should study her language, which was unusually difficult because she communicated in the Mohawk of nearly 300 years ago, employing a spiritual vocabulary derived from her birth people, the Huron or Wendat.
I have described the personal odyssey that unfolded in my books Dreamways of the Iroquois and The Boy Who Died and Came Back (where I write more openly about my trans-temporary engagement with William Johnson and his world than I have cared to do previously).
I call my dream mentor Island Woman; a Mohawk name for her birth people means People of the Island. She was captured by a Mohawk war party when she was five years old. Her precognitive dream about this led her to try to rouse her village but her people stayed asleep. In the Native American way, once taken and adopted, she was fully integrated into the Mohawk community and became a respected atetshents (dreamer, healer, shaman) as well as a clanmother. But she retains that Huron/Wendat spice in her speech, when she communicates with me across time and dimension.
I have been honored to have many Native people from Island Woman's territory approach me for help in reclaiming the old dreamways and even the old words that have gone missing from modern vocabularies. I am blessed by the friendship of Nathalie Shendaehwas Picard, a fine Huron/Wendat musician and educator from Island Woman's birth people. She is one of the gifted Native American dreamers who have graduated from my training for teachers of Active Dreaming.
She offers this testimonial:
Thank You to Robert for Dreaming  in Our Ancestral Ways
I am from the Turtle clan of the Huron-Wendat people of Wendake, Quebec. After almost a century of dormancy, our ancestral language is now being taught in the community.
I used to feel alone, as a Wendat dreamer when this heritage was trying to connect with me in a way that I could not really understand... Until one day, I discovered Dreamways of the Iroquois by Robert Moss, one of the most significant book that opened a door for me, changing my life and helping me connect the dots. This Australian writer who was living in NY, was dreaming in our ancestral ways, after his encounter with a Mohawk-Huron clan mother in the dreamtime. I am so grateful that he made his life journey to share with the world her teachings, in his own original innovative and empowering way.
I believe that as for our language, the same things is happening with our old ways of dreaming that has awakened, thanks to Robert Moss.
In Wendat tradition, dreams were matters of survival, guidance, medicine, power, and the best way to connect and nurture your soul.
Now, Robert's creative work is building an International community of dreamers who are weaving again a dreamspace that contains all possibilities, along with Island woman's and Robert's wisdom and makes alive the Wendat dreaming tradition.
Robert Moss "yatonwes" (I thank ) for learning Island woman's language and making your dream come true! Tho ïohtih!

--Nathalie Shendaehwas Picard, musician and dream teacher from the Turtle Clan of the Huron-Wendat people.


"Dreaming with Island Woman" is the first class in my new online course "Dreaming into the Dreamtime" for The Shift Network. You can listen to a free introductory talk on "Shamanic Dreaming in the Iroquois Tradition" on Wednesday April 19. The course itself starts on May 3 and runs for seven weeks, during which we will harvest insights and practical techniques from seven world traditions of dreaming.

Photo: With  Shendaehwas at my training for teachers of Active Dreaming
Posted by Robert Moss at 8:00 PM

Feeling very grateful to be a part of this circle!