Cracked or Creative: Speaking of Coincidence. 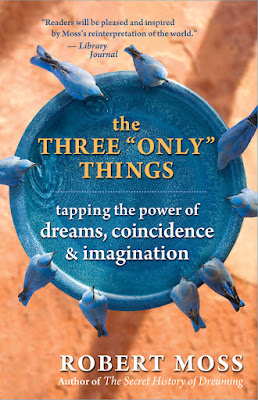 Coincidences are homing beacons. They are secret handshakes from the universe. They are extraordinary sources of guidance and direction.
The great psychologist Carl Jung lived by coincidence. and achieved a profound understanding that through the study of coincidence we will come to grasp that there is no real separation between mind and matter at any level of reality — a finding confirmed by the best of our physicists. He taught that the incidents of our lives and the patterns of our world are connected by meaning, and that meaningful coincidence may guide us to the hidden order of events.
Jung was so fed up with the reflexive dismissal of coincidence as only coincidence that he labored heroically to give us a new vocabulary with which to describe both the phenomenon and its character. He coined the word “synchronicity” and it has since achieved wide circulation. The term is unsatisfactory. It refers to things happening at the same time, but an interesting run of coincidence can play out over a longer period.
But “synchronicity” sounds scientific and respectable, and I often use it to get round the difficulty of talking about these things in a state of semantic confusion where we routinely dismiss things as “only” coincidence, or insist that an incident “wasn’t”  coincidence” when what we mean that it was coincidence, and it was important.
Coincidence multiplies when our thoughts and feelings are strong and focused enough to set up a magnetic field. Roberto Calasso describes how this works in the life of writers in his recent book La Folie Baudelaire:  “The writing of a book gets under way when the writer discovers that he is magnetized in a certain direction…Then everything he comes across – even a poster or a sign or a newspaper headline or words heard by chance in a café or in a dream – is deposited in a protected area like material waiting to be elaborated.” This has been my experience when engaged in bringing through a book. The world gives me story after story, lead after lead, and the shelf elves became hyperactive.
The idea that coincidences are important is troubling to some in the psychiatric community. ”Ideas of reference” – referring to the delusion that everything perceived in the outer world relates to the individual perceiving – are defined as a symptom of psychotic illnesses including schizophrenia. Determined not to be overawed by Jung’s learned borrowings from Greek, a Swiss psychiatrist named Klaus Conrad made up the word “apophenia” to describe a psychotic condition he defined as the “unmotivated seeing of connections” accompanied by a “specific experience of an abnormal meaningfulness.”
Conrad’s Greek was not as good as Jung’s. The word he wanted is apophrenia, which means “away from the mind.” But he left out the “r” in the Greek stem phrēn, so his coinage — meant to categorize a kind of nonsense — is itself nonsense. The mislabeled condition (mentioned in the title of a rock song and in William Gibson’s novel Pattern Recognition) is a disorder of compulsive pattern recognition that produces paranoid fantasies.
There are people who find meaning and inspiration in the cracks on a wall, and people who are simply cracked. The difference between them may be as extreme as that between Leonardo da Vinci (who urged his apprentices to study cracks in the walls) and the nut portrayed by Mel Gibson in Conspiracy Theory. When we navigate by synchronicity with discernment, we move effortlessly into creative flow. When we project our delusions onto the world around us, we put ourselves in a place of blockage and pain. It is the release or constriction of creative flow that will tell us whether we are on the right track (though let’s note that the release may involve a necessary redirection of flow).

- Adapted from The Three “Only” Things: Tapping the Power of Dreams, Coincidence and Imagination by Robert Moss. Published by New World Library. This book is now available in French, Spanish, Swedish, German, Russian, Lithuanian, Turkish, Chinese, Japanese, and Korean editions.
Posted by Robert Moss at 5:16 AM

I think all these three are inter-related. When we think something in our mind, it has a powerful impact which in turn appears in the world as a co-incidence. The power of mind is great.