Revolt of the Imagination: Narrative Lessons from Olga Grushin 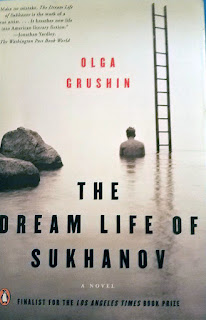 A Russian-American writer, Olga Grushin, brilliantly depicts the revolt of the imagination under a totalitarian system in her novel The Dream Life of Sukhanov. The protagonist is a promising Surrealist painter who buries his art in order to get a fat paycheck and a big apartment and a chauffeured car while working as an art bureaucrat. His suppressed imagination comes after him, spawning dreamlike anomalies in his everyday world, until that world - and the false values it instilled in him - falls apart.
Olga Grushin is a wonderful writer whose narrative devices merit close study. She uses shifts in tense and person to mark the transits between current experience in a narrative and things remembered or entered in imagination. In the protagonist’s present, the action is narrated in the third person and the past tense. When he is drawn back into memories, the narration is first person and present tense. The past is more present and more intimate than the present. When his dreams begin to take over his unsettled present reality, we shift to first person and past tense; the dream world is becoming the real world.
Another effective Grushin device: pictures come alive and spill over into the world. A figure in a brown coat from Dali turns up as a character in Moscow, both frustrator and liberator. A face reflected in a window in an early canvas turns out to be the face of the woman he will love and marry, unknown when he made the painting.

Dreams are the best part of sleeping. Sometimes they can haunt you, but at times they make you think who you are. They help you explore more about yourself, your life and the world.

This is a great book written by olga grushin. I have read this book. Dreaming is the best part of life. If you dont dream you won't work for it. Dreams are hope.