Becoming an eagle: dreamers as shamans 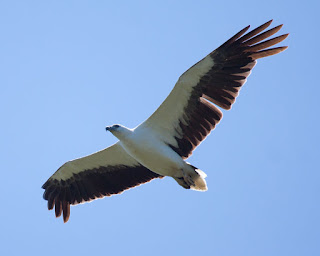 A woman dreamer finds herself in a different body, traveling with her clan beside a river in a primal landscape untouched by the ax. She knows the lives and relations of these native people intimately, and feels the coming of a hard winter.
She sees an eagle flying near the river, and someone tells her, "You can go fly with it." She is afraid to go too far from the river, so she waits until the eagle hovers overhead. Then,:
“I fly an eternal moment with this magnificent bird; beautiful brown, glistening feathers with golden speckles. Eagle is above, beside, then lands in the river. I land downstream and float on the warm white foam. The river is blanketed in white foam.
“After I dry off, I fly over the river again. I see Turtles where eagle had flown and landed. The turtles are a darker green. They are solid on the foam, not moving, just peacefully sunning themselves.”
The dreamer asked me how she should approach the meaning of this dream. For me, an experience of this kind does not require analysis, but honoring. Her dream was a journey into the life circumstances of an indigenous people, an entry into a "past" life that might be a prior experience of her own multidimensional self or that of an ancestor of the land where she lives, or her wider spiritual family. Within that life experience, she learned what indigenous dreamers know: you can become an eagle.
When a gifted Jungian analyst journeyed to the Central Desert in my native Australia, he sought to understand the practice of dreaming among the Pidjinjara, speaking through an interpreter to a "spirit man" who was said to know all about dreaming and the Dreamtime. To warm things up, he tried to give some account of his own dream practicum. How this translated into an Aboriginal language I do not know. The spirit man sat impassively, occasionally brushing away the blowflies. When the psychologist asked him to explain how he worked with dreams, the answer came back, via the interpreter, “He becomes an eagle.” When the Jungian sought to clarify what this meant, the statement was simply repeated: “He becomes an eagle.”
It was a just-so statement that had little to do with archetypal symbolism. When the Aboriginal shaman said he became an eagle, he meant exactly what he said: he travels in his dreambody as the eagle, sees with its keen vision, and goes where he needs to be.
The American dreamer who flew with the eagle and splashed down in the river did something similar, through the spontaneous shamanism of dreaming. Dreaming is traveling, in the understanding of ancient and indigenous peoples, and we are not confined to one form in these journeys. If you fly with the eagle, you don't want to waste too much time discussing the eagle as a symbol. You want to celebrate the connection, make or find something to keep or carry as a dream talisman, and remember, in the midst of the challenges of everyday life, that you have the ability to rise to a higher perspective, and see "many looks away". The last phrase is from the Iroquois or Longhouse People, who place the eagle at the top of their great Tree of Peace so it can watch and warn of things developing at a distance.
In my childhood, the bird I knew best was the sea eagle, native to northern Australia and also to the northern coast of Scotland, the home of my paternal ancestors. In the Orkneys, ancient shamans were buried together with sea eagles. For the islanders of the Torres Straits, the sea eagle is the preferred ally of the zogo le or shaman. I have lived outside Australia for most of my adult life, yet in big dreams the sea eagle sometimes comes, to lend me wings to fly back to my native country and see something I need to see.
In the Mohawk language, which I had to study because of my dreams of an ancient woman of power who insisted on communicating in her own language, the word for "shaman" or "healer" is ratetshents,which means literally, "one who dreams". Throughout indigenous North America, there are similar terms, underscoring the characteristic the real shamans: they are dreamers who can shift consciousness at will and travel in worlds invisible to ordinary eyes to bring back gifts to people in the visible world. The Kagwahiv, a shamanic dreaming people of Amazonia, contribute the thought that "everyone who dreams is a little bit shaman".