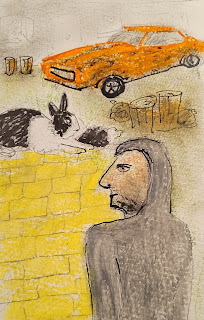 Not all my dreams are mythic adventures or exotic destination travel. I sometimes find myself in frustrating repetitive situations where my dream self is very far from a master of the universe. The other morning I came back travel worn and disappointed from a dream in which I was lost and confused and looking for help in all the wrong places.

Things started out well with a big book event in California in my honor. Then for some reason I got on a bus without checking where it was going and found myself in a remote location, hiring a sketchy character off the street to drive me back to my point of departure. I realized things were off when he led me down a scruffy path among trash bins where a weird black-and-white rabbit seemed to be snacking on the bloody remains of his twin, His car turned out to be a filthy rustbucket. At that point my dream self had the minimal good sense to pull out but was still far from where he wanted to go.
I recorded all the details. I will think about the rabbits and I will pay attention if any elements start to play out in ordinary reality, because dreams can show us the future quite literally and I have been known to do book events in California.
What weighed upon me after this dream was the reprise of a familiar, recurring dream situation I will call Lost and Clueless. The details change from dream to dream but the situation repeats every so often. When it does I make myself stay with the dream and ask: where in waking life am I Lost and Clueless in the sense that I am failing to use common sense, to adopt rational solutions and to seek help in appropriate quarters?
I think my dream producers gave me another B movie because they wanted to me to receive a message and do something about it. I would have liked to slam the door on my Lost in California dream. But I don't ever let myself dismiss an uncomfortable dream, let alone shrug "It's only a dream" because I know that every dream tells me more than I already know.
So I wrote my report as an email I sent to myself, my favorite way of first documenting a dream. Then I confronted the uncomfortable question: Where in waking life am I Lost and Clueless right now?
The answer came to me at once. For many weeks I had put off doing my part to complete a family Help Book. It is both a locator for documents and services and a set of directions any of us could use to get help in an emergency, the kind of guide that tells you who to call if the pipes freeze or the internet is down. The utility of this Help Book was made very clear in physical reality on the night of my Lost in California dream; we discovered that our internet was down for several hours.
Dreams require action. I postponed other plans and sat down at my desk and did my bit to complete the Help Book. This took less time than I had feared. With that job done, I felt grateful for the dream, no longer frustrated by it. No need now to hire a sketchy character with an odd bunny off the street. Though the link between the content of my dream and the waking situation might seem obscure to an outsider, I felt the inner logic and accepted the push.
We can be lost in dreams, as in waking life, in other ways that provide another kind of course correction. There is Lost and Clueless. There is also Lost and Found. The navigational law of serendipity is that we may need to get lost in order to find ourselves. The word "serendipity" is derived from Serendib, the magical kingdom in the story of Sindbad the sailor. Everyone wants to find the kingdom but it is not on any map. Sindbad finds it only after he falls off the charts, is shipwrecked, loses his shipmates and washes up on an unknown shore. To find a place you do not know you must go by a way you do not know. You can get lost in a dream, as in life, and find yourself in a place of wonder and delight. I'm looking forward to the next dream like that.
Drawing: "Lost in California" (c) Robert Moss
Posted by Robert Moss at 3:53 AM