The dream god and the faery lover at Halloween 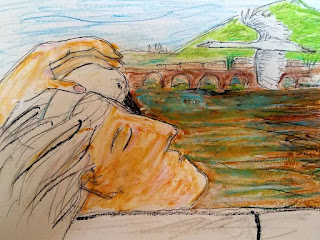 We find beauty or terror in our contacts with the Otherworld - or our flight from it - according to our courage and the colors of our imaginations.

How people respond to the banshee is an excellent example. The banshee is well-known in Celtic folk memory as a death messenger, whose appearance and weird cries are feared as the sign that death is near. The banshee is often depicted as a hag, or a crow, or a crow-woman.

But the banshee is actually the bean sidhe, which means "she-faery". She can appear as a being of amazing beauty. She can come as a personal or family guardian in tight situations - as a family banshee appeared to members of the royal house of Munster on the eve of the battle of Clontarf.

Above all, the banshee comes to invite us or escort us on the Otherworld journey: not only the journey that follows physical death, but on journeys beyond the physical world from which we may return to the body with magic and power.

Banshees are much abroad at Samhain, or Halloween.

The story of Aislinge Óenguso, The Dream of Aengus,  turns the traditional fear of the banshee on its head. Instead of being scared of being caught by a banshee, the hero of this story is out to catch one, because night after night, she has been visiting him as his dream lover. This wild love story haunted Yeats all of his life and inspired him to write some of his most haunting verse. We'll call the hero Aengus, as the poet did.

Aengus is a lover and a friend of lovers. He is a trickster, a shaman and a soul healer. He is described as "mac Oc", the Young Son, forever young. He lives in the Brugh na Boinne, a palace beneath a Mound of Wonder that recent travelers know as Newgrange. Women everywhere dream of Aengus; his butterfly kisses graze their lips and their secret places.

But Aengus is no longer master of his own dreams. His dreams have a mistress. She first appeared by his bedside in a glory of red-gold hair, her long white body dancing through the veils to music that played him like a harp and shook him like a tambourine. Carried by the music and his surge of passionate desire, Aengus flies with her, like a wild swan, into a different landscape.

In the morning, exhausted, he can barely fall out of bed. He is listless, lethargic, not even interested in sex, his speciality. This goes on night after night, day after day. His mother is troubled. She sends for a famous doctor, so skilled he can diagnose what is wrong in a house before he walks through the door, by reading shapes in the smoke from the fire.

The doctor sees at once that Aengus is away: a part of his soul has left his body to live with his dream lover. The cure is to put body and soul together again. This involves finding the girl, and putting the lovers together in their physical as well as their astral bodies.

Will Aengus please describe his dream mistress as exactly as possible? He aches for her as he speaks of the red-gold hair, the pearly skin.

Very well, Aengus' mother has resources. She is a queen and a goddess of the Tuatha de Danaan. She will send out searchers to look for a girl who fits Angus's description.

This is not such an easy assignment, however, because the dream lover is of the Sidhe, and is hidden in the faery mists. A year passes, and she is not found.

Now Aengus' father is called in. He is the Big Guy among the old gods, the Dagda, one end of whose outrageously huge eight-pronged club delivers instant death, while the other brings the dead back to life. But he can't or won't help with finding the dream lover, except to recommend the far-sighted Bodb the king of the Sidhe in Munster, as the faery for the job.

Bodb tracks the girl to yet another of the Mounds of Wonder. The girl is a bean sidhe, and she has the right kind of name for a banshee. Her name is Caer Ibormeith, which means Yew Berry. Of all trees in her landscape, the yew is most intimately associated with death.

It is agreed that Aengus must rally himself and go to Yew Berry's mound to spy on the banshee and make sure she is the one he has dreamed. She is. Her beauty shines beyond that of the "three times fifty" noble ladies about her, all wearing silver at their throats while Yew Berry wears gold.

At this point, in a different kind of story, we might expect the dream lovers to fall into each other's arms and elope. After all, they have been doing it every night for two years. But there are complications.

First off, Yew Berry's mound  is in the realm of the notorious Queen Maeve and her jealous husband Aillil, and they must not be scorned. They agree to help bring the lovers together, but Yew Berry's father won't hear of it. Even after the joined forces of the Dagda and King Aillil have stormed his faery fort, he clings to his daughter.

There are many tests and battles before the secret is learned. Yew Berry is under an enchantment, sometimes represented as a curse, sometimes - in the deeper tellings - as a gift. She does not stay in one form. She is a beautiful woman for one year. Then for the next year she is a white swan. Then the cycle repeats.

The day of shapechanging is Samhain. If Aengus would win her, he must find her on the liminal day, on a lake whose name is The Dragon's Mouth. At Samhain, Aengus goes to the Dragon's Mouth. He finds "three times fifty" white swans with silver chains around their necks, and one swan with a gold chain. He recognizes his love in the shape of the beautiful white bird, and calls to Yew Berry to fly to him. No, she tells him. You must change into my form.

Aengus changes, becoming the long-necked bird. They mate, in beating splendor, above the deeps of the Dragon's Mouth. They fly together back to the palace of Brugh na Boinne - Newgrange - and the love music they make in flight is so lovely and lulling that all the land is at peace and people drift into pleasant dreams and stay there for three days.

It is an amazing story, a love god smitten by love, and seizing a moment of opportunity - at Halloween - to bring his lover from one realm into another.

In the best-known tellings of the Dream of Aengus, death is not mentioned. But the whole story is a dance with death, in several guises. It involves the death-in-life that we suffer when a part of our soul goes away, because of pain or abuse or heartbreak or - in this case - a longing for something beyond the familiar world. It involves the rescue of someone or something from the Land of the Dead. Yew Berry's name is a dead giveaway. Her mound  is actually a piece of the Underworld, her father one of the princes of the dead.

Terror or beauty, banshee or faery lover. On the Night When the Veil Thins, we are especially reminded that we can never claim the treasures of the Otherworld - and a love bigger than the familiar world - unless we can brave up.

Adapted from The Dreamer's Book of the Dead by Robert Moss. Published by Destiny Books.

Journal drawing by Robert Moss from a spontaneous night vision. A white swan took flight from my third eye and we went flying together lover a river in Europe.