What Wolfgang Pauli Read in His Dreams 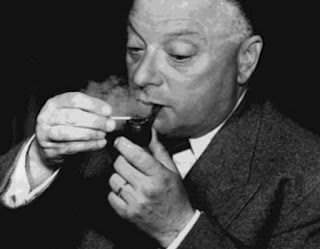 I am always astonished when people tell me they don't read in their dreams or find that if they try to dream the text blurs and they can't follow it. I read even more in dreams than in regular life, and often surface from a dream with the text - and sometimes a voiceover,often my own - still streaming. I have been able to catch whole pages from these experiences. Last night, in the library of a French chateau, I was reading and singing with a group from the libretto of an operetta with dual texts in English and neo-medieval French.

Revisting Wolfgang Pauli's correspondence in preparation for a new course, I was delighted to recognize a kindred spirit, a fellow dream reader. Pauli was a Nobel laureate, pioneer of quantum mechanics, and creative colleague of Carl Jung in the development of the theory of synchronicity and the effort to understand the interweave of mind and matter in the universe. He once declared that dreams were his "secret laboratory".

Again and again, he receives and reads letters in his dreams. Sometimes in dreams he reads and signs documents. He dreams that he is in Copenhagen and Niels Bohr tells him that three popes have given him a new house. He signs a document and Bohr gives him a train ticket so he can ride to the new house. He wakes but sleeps again and the dream continues. A Catholic uncle tells him the house is for him and his family. He comments that "my dreams make no actual distinction between laboratory and church so the new house could be both."[1]

He is told in a letter that there "with me there is something essentially different from C.G.Jung." His number has changed from 206 to 306, not so with Jung. The letter is signed Aucker, a mystery name to him. [2]
He takes a tram to a large house that is the new building of ETH, the top science and technology university in Zurich where he found an academic home. In his new office are two letters, one very long signed by his boss; it says "ferry dues settlement". The other, in an envelope that says "philosophical chorus society", contains beautiful red cherries, some of which he eats." [3] A voice says: "At the place where Wallenstein atoned for his sins with his death a new religion shall arise." [4]
These two dreams, he tells Jung, are fundamental for him. They speak of the need to move beyond "the nonfunctioning of the religious tradition that strikes me as the distinctive characteristic of the West in the Christian era" towards "a chthonic, instinctive wisdom" and a religion that "attaches more value to the transformation of man through immediate experience than to an old book." [5]
His dream language substitutes scientist terms for Jungian psychology whose terminology is "less differentiated." [6] His dreams inspire him to tussle with Jung over the vocabulary the pyschologist developed to describe meaningful coincidence. A mathematician tells Pauli in a dream, "Cathedrals will be built for isomorphy"[7] and he wakes in high excitement. He proposes to Jung that he should substitute the term "isomorphy" - which means identity or close similarity of forms - for the word "synchronicity" which Jung had invented. [8]
He has his own math-derived dream language of which "isomorphy" is a prime example. He has a symbolic language he tries to decode according to ancient myths and Gnostic legend like Jung, as with his dream of being at a house in the tropics where one cobra rises from the floor and a second from the earth. He dreams word codes involving foreign languages. In one of these dreams, Bohr tells him that the difference between V and W corresponds to the difference between Danish and English. As he wakes the word vindue enters his mind and he counts it part of the dream. He realizes that in Danish the letter W does not exist. He hasn't grasped what is going on until he nearly collides in the dark, after a meeting, with an Anglicist  named Straumann, a philologist who specializes in early English. Strausmann explains how the W vanished from Germanic languages. Next morning Pauli finds himself sitting opposite Strausmann on the tram , a phenomenon he calls "doubling".They discuss their previous night's speculation that vindue originally means "wind eye". In refelecting in the meaning of this episode, Pauli writes "The dreams and their images are 'Windaugen' for me." [9]  The wind is spirit (pneuma) producing dreams through a visual faculty.
Sometimes, in dreams, Pauli reads formulas on a blackboard. [10]
Two elements in his dreams that may speak to many of us: his dream self is more fluent in foreign languages, especially French (11) and, again and again, he can't get through to someone (usually his wife) on the phone (12).
References
1. C.A.Meier (ed) Atom and Archetype: The Jung/Pauli Letters, 1932-1958 trans. David Roscoe (Princeton NJ: Pinceton University Press 2001) pp.135-6.
2. ibid p.137
3. ibid p. 138
4. ibid p.139
5. ibid p.140-1
6. ibid
7. ibid p.139
8. For a full account of Paui's dream life and dialogue with Jung, see my Secret History of Dreaming (Novato CA: New World Library, 2009) chapter 11.
9. ibid p.145
10. ibid p.150
11. ibid
12. ibid p136
Posted by Robert Moss at 10:41 AM