Notes from a Reading Life: Jung's Dove Girl and the Black Books 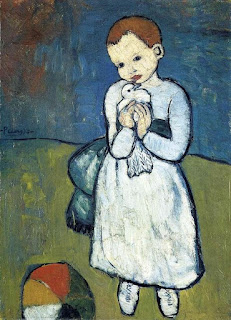 Just after Christmas 1912 Jung dreamed he was with his children in a tower, at a round table topped by a wonderful green stone, A seagull or dove flew in. It turned into a girl of eight who ran and played with his children among marvelous colonnades. The girl turned back into a bird and gave him a mysterious message.

He knew no way to find the meaning of the dream. He wrote later , “All I could do was just wait, keep on living and watch the fantasies.” The bird dream also convinced him that the unconscious was populated with “living” entities, things with their own life.

So began the long experiment in wakeful fantasy (that he later called active imagination) chronicled in the Black Books.

I wonder whether Jung knew at the time about the doves of Dodona. The priestesses of the famous oracle of the speaking oak, themsleves called Doves, told Herodotus that the oracle was created because a dove flew from Egypt and spoke from the tree in a human voice, announcing the will of the gods. Jung's dream of the shapeshifting bird girl has the uncanny, numinous quality of what we can easily imagine to have been the experience that brought pilgrims to such places over many centuries.

The call and the movement of birds were closely monitored at Dodona, as throughout the ancient world, and birds were recognized as companions and sometimes adopted forms of deities as well as lesser spirits: the eagle of Zeus, the dove of Aphrodite, the sea-bird and owl of Athena. Carrier pigeons - doves by a different name - were also an important communications system, and when oracles delivered early and accurate news, it may have been because something arrived on the wings of a bird as well as the wind of divine or daimonic inspiration.

I love Jung but am not a Jungian. (Neither was he.) I try to keep up with his literary afterlife in this world as Sonu Shamdasani and others bring out volume after volume of seminar notes and journals. I wrote from my visions of his afterlife in another world in my story "The Other Bollingen" in Mysterious Realities. 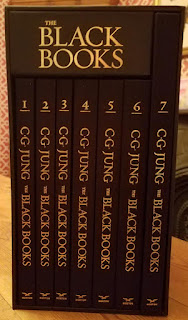 I have the Black Books and enjoyed the book-length introduction where I discovered the dove girl and her influence on Jung. However, I was exhausted halfway through one of the six volumes of transcriptions in which characters with big names in Jung's wakeful fantasies throw hissy fits at each other and make rude aspersions about each other's genealogy. Not to be read in a reverential way, at all, and generally lacking in the poetry (and the art) of the Red Book.

So I took a break from the Black Books and moved a more accessible posthumous publication,  Introduction to Jungian Psychology harvested from a 1925 seminar on analytical psychology and again edited by the indefatigable Shamdasani, to the top of the Jung section in my current reading piles. And I plunged deep into the sources for what was going on at the ancient oracle of the dove priestesses and the speaking oak at Dodona, using the skills of shamanic dreaming to travel through the texts and the archaeology and practice what Suhrawardi called "the knowledge of presence".