The real history of Lincoln's dream 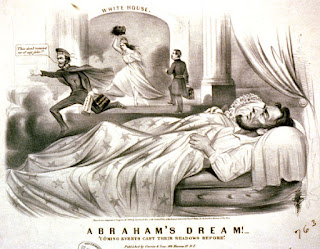 Most of us know that Abraham Lincoln dreamed of his assassination a couple of weeks before he was shot. But the full story of that dream - of how it haunted Lincoln, and how he tried to get a second opinion on it, and finally failed, tragically, to heed the warning - is much more intriguing and instructive than the truncated version we are usually given.
The original source is a memoir by Lincoln's friend and aide Colonel Ward Hill Lamon, who heard him tell the dream. In Recollections of Abraham Lincoln Lamon recalls that Lincoln was "haunted" by a sinister dream that seemed "amazingly real" but said nothing until confronted by his wife Mary to explain his melancholy and "want of spirit."
Lincoln began by talking about the Bible. "It is strange how much there is in the Bible about dreams....If we believe the Bible, we must accept the fact that in the old days God and His angels came to men in their sleep and made themselves known by dreams."
Asked for his own views on dreams, Lincoln revealed that he was "haunted" by a dream from a few nights before - and that he had sought a second opinion on the dream, repeatedly, by opening his Bible at random and seeking a message in the text his eye fell upon. The first time he did this, he found himself in Genesis 28, reading the story of Jacob's Ladder, one of the great dream visions in the Bible. He tried again and again. "I turned to other passages and seemed to encounter a dream or vision wherever I looked.
Clearly this gave him the sense that his own dream was a true dream, perhaps a prophetic one. This increased the grip of the dream on him, to the point where. Lincoln said, "the thing has got possession of me, and like Banquo's ghost, it will not down."
At Mary's prodding, he recounted the dream. There was first a deathly stillness around him. Then he heard the weeping of invisible mourners. He roamed the White House, trying to understand what was going on. The rooms were all brightly lit but he found no one until he entered the East Room and met with "a sickening surprise". Soldiers stood guard over a corpse wrapped in funeral vestments on a catafalque. When Lincoln demanded, "Who is dead in the White House?" one of the soldiers replied, "The President - he was killed by an assassin!" A great howl of grief rose from mourners in the room and waking, Lincoln was unable to sleep for the rest of the night.
Having told the dream, Lincoln announced that - despite his Bible discoveries and the depth of his feelings - it was "only a dream" and should be forgotten. But it stayed in his mind, and he tried to dismiss it by developing the idea that it could not be about his own assassination because - as he told Lamon - it was "some other fellow" that was killed.
Lincoln understood dreaming. He regarded true dreams and presentiments as natural, not supernatural, and extraordinary visions as the workings of "The Almighty Intelligence that governs the universe." Yet he failed to act on the dream that could have saved his life.

ABRAHAM'S DREAM is a print produced by Currier & Ives in 1864. The artist depicts Lincoln as tormented by nightmares of defeat in the election of that year. In his supposed dream Liberty, brandishing the severed head of a black man, is at the door of the White House, driving Lincoln out with her foot. Lincoln is seen fleeing, wearing a a Scotsman's plaid cap and a cape. His dress is an allusion to an incident prior to his first inauguration in 1861. Informed that an attempt would be made to assassinate him during his trip to Washington, Lincoln took a night train and disguised himself. It was widely reported that he was spotted wearing a Scotch plaid cap and a long military cloak and his critics in the press had a field day poking fun at his alleged timidity. Tragically, this experience may have influenced Lincoln's failure to do more to change the future he previewed in the assassination dream.
Posted by Robert Moss at 12:00 AM

What is interesting here is not only the public recording of an important presidential dream but the public disclosure of the method Lincoln used in his attempt to disprove the dream - randomly seeking an answer to the question of the truth of the dream in the pages of the Bible. Lincoln admitted being haunted by the dream and began to seek - rather desperately - for an opposite confirmation from a source he perceived as equally as powerful and magical as the dream. The more seemingly random games he played of opening the Bible and pointing at what lay before him, hoping for a message that denied his dream, the more confirmation he had that his dream was real and as terrifying as it appeared. Confirmation of the truth of dreaming and of the terrible potential truth of this dream in particular froze Lincoln into realizing the dream's fateful end rather than spurring him into working out a different outcome.

Hi Wanda - Yes, the Lincoln assassination dream is well-known and we frequently see a quote from his remarks about dreams in the Bible. But the biographies and books on dreams rarely focus on how he was practicing bibliomancy - using the Bible as his oracle book in the same way as wise women in Appalachia used their "sators" - to get a reading. Your observation that he may have been "frozen" by a sense of fatality from the dream, backed by the Bible, may be spot-on.

Whatever our dreams may seem to portend, I am a great believer in the idea that dreams show us the possible future rather than the predestined future, and that we should always seek to change future events perceived in this way for the better if we don't like 'em. I wrote a whole book on this theme, "Dreaming True".