The Wand Woman and the Odin Squirt

I do much of my best reading and research in the middle of the night, between naps. Last night I decided to take a break from my recent four hour sessions with Jung's Black Books (which make the Red Book look like beach reading) and return to my studies of Viking era history, mystery and magical practices. 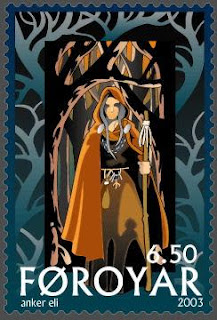 My particular focus last night was the staff or wand of the völva, or seeress. The word völva means "staff-carrier" or wand woman and the staff was her principal power tool, used for summoning spirits, for projecting harm or healing, for astral riding, for opening portals between worlds, for blasting enemies and probably for sex magic. It could be as large as a medieval pole-weapon or as slim and elegant as a wand acquired in Diagon Alley in the Harry Potter stories.
I read the description of a decorated völr (staff) in the Saga of Erik the Red. I examined scores of photos of staffs unearthed in the gravesites of Scandinavian women of power in Neil Price's monumental book The Viking Way. Most of the ones that have survived are metal but surely many more - long since decomposed - were of wood. One of the surviving wooden staffs, found in a bog at Hemdrup in Jyllund, Denmark, has a remarkable set of carvings suggesting an association with soul travel. A female figure in a feathered robe appears to be flying through the air, with her dogs nearby amd a triquetra as a magical seal.
I went online seeking more images and discovered that Etsy has dozens of pages offering reconstructions. Then I found this wonderful painting (above) of a völva striding forth with her staff by Arkel Eli Petersen, one of a series reproduced as postage stamps in the Faroe Islands, a self-governing province of Denmark.
I reread the Völuspá in the Poetic Edda, in which Odin journeys to a (deceased) völva to clarify the meaning of a dream and see into the future. Even the All-Father, no slouch at magic himself, turns to a völva when he wants reliable divination.
After five hours with my Norse books, I took a break by cooking one of the few dishes of which I am proud: a super-spicy hot chili loaded with fresh jalapenos and many cloves of garlic. Crushing garlic, I managed to squirt myself and was temporarily blinded in one eye. This has happened before, with lemon juice, as memorable punctiation to an interactive adventure in realms of soul healing and the care and relocation of draugr (Old Norse for the restless dead) I may tell elsewhere. Dabbing garlic juice from my eye,I again recalled how Odin paid with an eye at the well of Mimir for the power to see into the Otherworld. 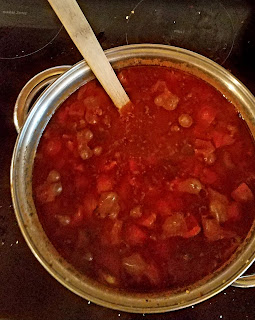 Note to self: be careful what you squeeze after squeezing in a full helping of Norse mythology and magic.

The Völva as Cat Woman
I have long recgonized that my nocturnal habits are catlike and as I pursue my Norse studies - in dreams and visions as well as in books and conversation with friends who have walked these paths - I am struck by how important cats seem to be in Scandinavian myth and magic. The latest confirmation: 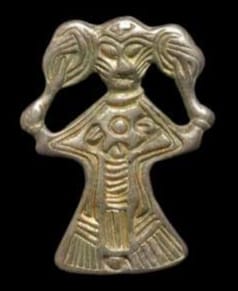 She comes in this silver body from a trove of jewelry unearthed at the former estate of a Viking magnate on Lake Tissø in western Zealand. Since the settlement was named for the god Tyr some scholars speculate that she was part of a blót, a sacrifice to the god. She has the face of a cat, or a shapeshifter in the midst of transformation.
Some think she is Freyja, the great goddess of the Vanir and mistress of magic who rides through the sky in a wagon pulled by cats. I suspect she is a völva, a seeress who may have painted her face like this in seidr and other rituals. Face paint was found inside a little cat-shaped box that was also a belt buckle. In other Viking tombs we find the remains of völva outfits including catskin gloves and hoods lined with catskins.
This cat woman resides for now in the National Museum of Denmark in Copenhagen, at least when the lights are on.
Posted by Robert Moss at 11:27 AM